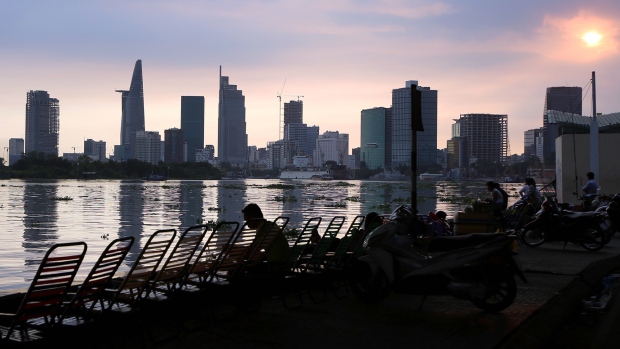 People sit along a waterfront as residential and commercial buildings stand in the background in Ho Chi Minh City, Vietnam. , Lin Luong Thai/Bloomberg

The Grand Manhattan embraces the latest in New York living.

The 39-story development will house apartments, a hotel, restaurants and some of the most expensive real estate in the country. But instead of Central Park views, it’s located in Ho Chi Minh City’s District 1, better known as Saigon’s Wall Street.

It’s the latest brainchild of Bui Thanh Nhon, a former seller of veterinary medicine who’s built his Novaland Group into one of Vietnam’s largest property companies. The chairman’s majority ownership means he’s amassed a fortune of around US$800 million, according to the Bloomberg Billionaires Index.

Such opulence would have been inconceivable in 1995 when Nhon shifted Novaland into real estate. The communist country has since become one of the fastest-growing economies in the world. Expansion has averaged more than 6 per cent per year over the past 20 years, after Vietnam opened up to foreign investment and began taking the shackles off its private-sector companies. More recently, factories have been relocating from Southern China, helping GDP to top 7 per cent last year.

That’s spurring overseas investors to target the nation’s real estate, alongside a rapidly growing cohort of well-heeled domestic buyers, eager to put hard currency into property. In a world where home prices are looking precarious from London to Hong Kong, Sydney and New York, it makes Vietnam an attractive location. 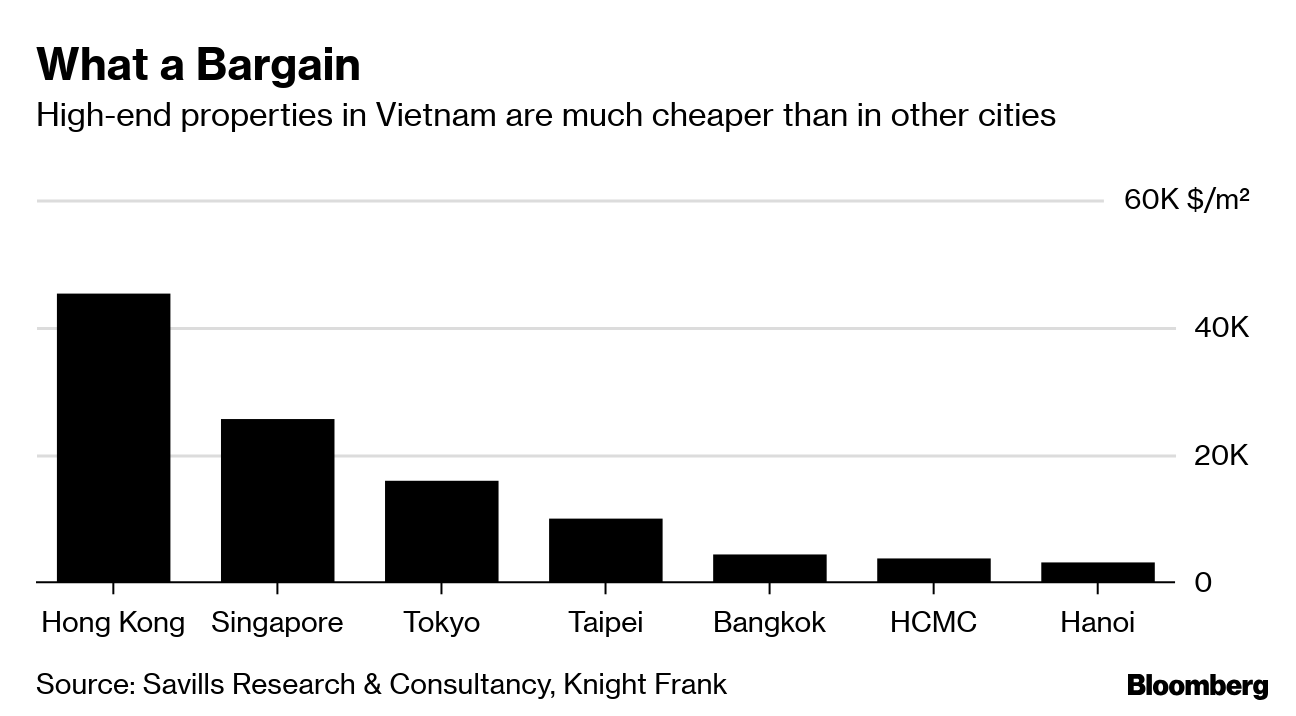 Vietnam is “where southern China was 10 or 15 years ago,” said Goodwin Gaw, chairman of Hong Kong-based private-equity firm Gaw Capital Partners, which oversees US$17 billion in real estate assets globally. It’s no longer a sure thing considering home prices have been rising steadily over the past 18 months, but “long term it’s still very good if you’re able to hunker down.”

Prices for luxury condominiums in Ho Chi Minh City climbed 17 per cent in 2018 to an average of US$5,518 per square meter, according to CBRE Group Inc. The firm forecasts they’ll climb nearly 10 per cent by early 2020 to US$6,000 per square meter. (More affordable condos in the city only increased 1 per cent last year.)

Nhon’s project contains two- and three-bedroom units that start from US$6,000 per square meter. (He declined to be interviewed for this story.) While that’s almost double the price for a typical high-end apartment in Ho Chi Minh City, it’s a fraction of the cost in Singapore, Tokyo or Hong Kong, the world’s least affordable market.

While demand from overseas investors remains strong, the latest wave of buyers are Vietnam’s newly prosperous. The number of people with net assets of US$30 million or more increased by 320 per cent from 2006 and 2016, the fastest pace globally ahead of India and China, according to a 2017 report by Knight Frank.

Many Vietnamese have built their wealth with real estate, according to Chris Freund, founder of private-equity firm Mekong Capital. Home ownership rates exceed 90 percent, one of the highest in the world. Rising values mean there are middle-class families with dwellings in excess of US$1 million.

Neil MacGregor, a managing director at Savills Vietnam, the sales agent for The Grand Manhattan, said developers used to focus on the middle class but are now turning their attention to the more affluent. “We have more and more very rich Vietnamese, particularly entrepreneurs looking for places to put their money," he said.

Land supply in central locations, however, is extremely tight, one reason the wealthy are keen to buy now, according to MacGregor. Another factor driving demand for urban apartments is the shift away from the Asian tradition of several generations living under one roof.

“We’re seeing a significant change, where young couples prefer to escape from their parents after marriage,” said Duong Thuy Dung, a senior director at CBRE. “They like to buy condos in gated communities.”

Despite Novaland’s prominence -- it’s Vietnam’s second-largest listed developer -- little is known about Nhon. Born in 1958, he started the firm in 1992 selling animal healthcare products after studying agriculture at Ho Chi Minh City University of Agriculture and Forestry. Now, units sold by Novaland account for about one-quarter of all apartments sold in the city.

"Most Asian businesses always turn to real estate when they become successful in whatever core business they have," said Andy Ho, chief investment officer at VinaCapital Group Ltd., which invested in Novaland via its London-listed Vietnam Opportunity Fund. "When their country’s wealth grows up, people buy real estate.”

--With assistance from Frederik Balfour and Shawna Kwan