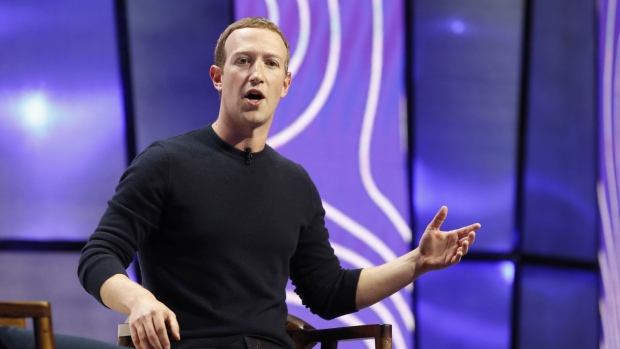 Mark Zuckerberg has his hands full.

Facebook Inc.’s employees have been staging walkouts (virtually, of course — it’s Silicon Valley and a pandemic is afoot).

They’ve also posted to an internal chat board, complaining that Zuckerberg, the social media powerhouse’s founder, is allowing it to be used to foment violence, hatred and disinformation by letting President Donald Trump’s incendiary Facebook posts remain in place.

A civil rights group met with Zuckerberg and his chief operating officer, Sheryl Sandberg, on Monday to discuss their concerns about Trump using Facebook to divide the country amid protests sparked by the death of George Floyd, an African American, while in police custody in Minneapolis.

One of those who joined the meeting, Color of Change President Rashad Robinson, was troubled by Zuckerberg’s decision to keep the Trump posts.

“The problem with my ongoing conversations with Mark is that I feel like I spent a lot of time, and my colleagues spent a lot of time, explaining to him why these things are a problem, and I think he just very much lacks the ability to understand it,” Robinson told a Bloomberg News reporter.

Robinson and two other civil rights leaders who participated in the Zuckerberg call also released a statement elaborating on that thought: “He did not demonstrate understanding of historic or modern-day voter suppression. … Mark is setting a very dangerous precedent for other voices who would say similar harmful things on Facebook.”

Zuckerberg held a video conference on Tuesday with employees to discuss the Trump backlash and stood firm.

He said letting the Trump posts remain was a “tough decision” but was the “right action.” Casey Newton, a reporter for The Verge, obtained an audio recording of a meeting Zuckerberg held last Friday with employees that offers a deeper look into his thinking about the Trump posts.“This is not how I think we want our leaders to show up during this time.

This is a moment that calls for unity and calmness and empathy for people who are struggling,” Zuckerberg said. “There is a real question coming out of this, which is whether we want to evolve our policy around the discussion of state use of force.

Over the coming days, as the National Guard is now deployed, probably the largest one that I would worry about would be excessive use of police or military force.

I think there’s a good argument that there should be more bounds around the discussion around that.”Like many of his compatriots in Silicon Valley living in the time of Trump, a pandemic, economic chaos, income inequality and social upheaval, Zuckerberg has reached a tipping point.

The visionaries who built fortunes around products and services that weaved the world more tightly and imperfectly together with just the flicks of digital switches have been content, by and large, to pretend their machines are friction-free, self-perpetuating and self-regulating.

Facebook, perhaps more than any other digital invention, never had a chance of perpetuating that myth.As many as 2.2 billion of the planet’s 7.8 billion people use Facebook.

It is a giant advertising and communications machine, a vast social trampoline and an enormous chessboard for political and business operatives.

Yes, Zuckerberg built it, but its influence and scope have certainly outgrown his ability to steer it effectively without being well advised and open-minded.

In addition to concerns about the Trump posts, Facebook employees have complained that Zuckerberg operates in a bubble and needs greater diversity among his senior advisers.

But as he moved to reassert his authority within the company in recent months, the 35-year-old mogul has packed his board of directors with more pliant members.

An internal study Facebook’s senior executives commissioned in response to criticism about whether the platform had been weaponized by Russians and Trump’s team during the 2016 election — and Zuckerberg’s own concerns that the site was awash in “sensationalism and polarization” — was shelved.

Among other things, the study found that Facebook exacerbated tribalism and division among its users. A senior Facebook executive dismissed efforts to address that problem as “paternalistic,” according to reporting from the Wall Street Journal.

Facebook has said it doesn’t plan to vet political advertising for its veracity ahead of the 2020 election.

Last week, as Twitter wrangled with Trump over tweets the company decided to label with a warning and then fact-check, Zuckerberg let it be known that he didn’t think any social media platform should be an “arbiter of truth.”

This is consistent with statements he has made in the past about the need for Facebook to take a hands-off approach to content on its site and that the burden should be on users about what to believe.

This isn’t consistent with how Zuckerberg has acted, however. For example, and to his credit, he spotted the danger of Covid-19 early and Facebook announced in January that it would remove disinformation about the coronavirus from the site.

He later set up an information center about the pandemic on Facebook dedicated to conveying high-quality and accurate data to the site’s users. There are other examples of Facebook proactively removing information or interactions it deemed dangerous or abusive from the site as well.

More recently, we have Zuckerberg’s musings about how Facebook might respond if there’s an “excessive use of police or military force” in the U.S.

There is plenty of room for Zuckerberg to make a principled free-speech defense around Trump or anyone else who posts inflammatory material to Facebook.

He went in that direction in one of his own Facebook posts on Friday. “Our position is that we should enable as much expression as possible unless it will cause imminent risk of specific harms or dangers spelled out in clear policies,” he wrote.

This is reasonable and classic advocacy for free speech. And it bears the classic disclaimer: You can say anything you want in America, but you’re not allowed to yell “Fire!” in a crowded theater.

People might get hurt — and in that instance, their safety outweighs your free speech.

That same argument can be made about a political leader threatening violence when people of color, burdened with centuries of racism and discrimination seeded with contemporary despair, take to the street to protest peacefully.

But the Trump-Zuckerberg debate also involves dynamics other than the battles taking place on city streets right now. Zuckerberg is a shrewd businessman, and policing his site effectively and proactively would be more burdensome and expensive were he to do it.

Running Facebook like a news platform, which it is, rather than as just another technology platform, which Zuckerberg would like to continue pretending it is, would force him into regulatory regimes and responsibilities for which he probably has little appetite.

And if his company doesn’t merely foster tribalism and polarization, but actually thrives because of those forces — as the internal Facebook study concluded — why would he rush to overhaul anything?

Yet here Zuckerberg is.

Reality has intervened and thrown roadblocks in front of Facebook’s spectacular success. He can continue trying to navigate around them with a schizophrenic approach to free speech deployed as a matter of convenience.

Or he can help Facebook become a more mature and responsible enterprise by leading it differently.

Timothy L. O'Brien is a senior columnist for Bloomberg Opinion.