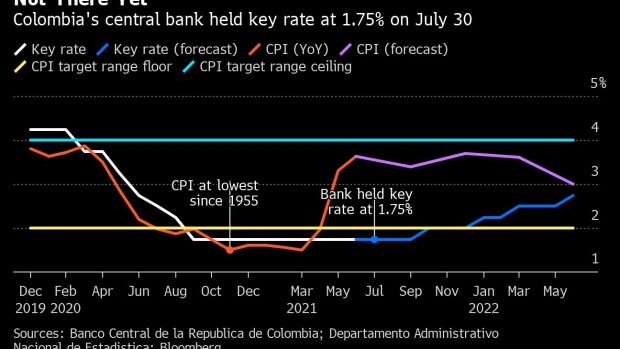 Shoppers walk through the centre of Bath, U.K., on Monday, July 5, 2021. The U.K. is in a race to vaccinate the population against the fast-spreading delta variant quickly enough to be able to lift social-distancing curbs and reopen more businesses on July 19. Photographer: Chris J. Ratcliffe/Bloomberg , Bloomberg

(Bloomberg) -- A week after U.S. Federal Reserve Chair Jerome Powell said there’s still some way to go before stimulus can be reduced, a similar message may come from the Bank of England this Thursday.

The rise in coronavirus infections in the wake of the European soccer championship has heightened uncertainty about Britain’s economic recovery -- at least in the short term.

The U.K. central bank’s rate-setting panel -- down a member after the departure of chief economist Andy Haldane in June -- is forecast to see the doves prevail when policy-makers meet.

Before taking their foot off the stimulus pedal, they’re likely to want to know how the U.K. jobs market fares when the government’s wage-support program ends in September, and whether the success of the vaccine rollout can tame the delta variant ahead of the start of the school year.

The BOE also plans to formally adopt negative rates as a policy tool, but Governor Andrew Bailey has been at pains to emphasize that operational readiness doesn’t imply that sub-zero territory is a desirable destination.

“We expect policy makers to vote unanimously in favor of keeping rates at 0.1%. Our base is that the first rate hike comes at the end of 2022.”

Elsewhere, central bankers in Brazil and the Czech Republic are predicted to hike interest rates yet again, while policy makers in Australia, India, Thailand and Egypt are set to hold.

The monthly employment report for July will be released Friday. Economists expect a robust reading of about 900,000 jobs added to payrolls. The release will shed more light on the strength of the U.S. recovery as well as challenges to hiring, and will inform the outlook for policy makers at the Federal Reserve. Data on manufacturing, factory orders and weekly jobless claims are also due.

Fed Vice Chair Richard Clarida and Fed Governor Christopher Waller are scheduled to speak, which should give investors more insight into the central bank’s thinking on inflation and the potential for tapering its bond-buying purchases.

Central bankers in the region are set for a busy week.

In addition to the BOE, Czech policy makers gather on Thursday and are expected to raise rates for a second consecutive meeting. Later that day, Egypt is predicted to keep its benchmark on hold amid accelerating inflation.

Turkey reports consumer-price inflation for July on Tuesday, days after the central bank raised its year-end forecasts but predicted a “significant” drop in price growth in the fourth quarter -- which may open the window for a rate cut sought by the president.

Meanwhile, Russia will be watching for further confirmation that surging inflation is near its peak as some produce prices decline with the arrival of this year’s harvest.

Reserve Bank of Australia chief Philip Lowe faces a big call on Tuesday over whether to push back the planned tapering of the central bank’s bond buying.

The optimism of early July has faded in a wave of delta variant infections that’s plunged key parts of Australia back into lockdown. Lowe will also be grilled in parliament later in the week and may have to acknowledge that the economy’s enviable recovery is heading back into reverse.

South Korean trade figures out at the start of the week will offer a measure of how the recovery in global demand may be starting to plateau, though year-on-year gains will still likely top the 30% mark. Following the latest inflation data, minutes from the Bank of Korea’s recent policy meeting will shed light on how aggressive the board’s dissenters were on the need for rate hikes.

Tokyo inflation figures also out Tuesday will point to the likely direction of the national trend ahead of a re-weighting of Japan’s CPI basket. Thailand sets rates on Wednesday against a backdrop of surging virus cases and a flagging growth outlook. Indonesia, itself facing one of the world’s worst virus outbreaks, reports GDP on Thursday.

Chile’s economic activity figures for June, to be posted Monday, look set to hit double-digits for a third straight month after beating forecasts in March, April and May.

On Tuesday, June data on Brazil’s industrial production will likely show a 10th straight positive year-on-year reading. And Colombia’s central bank posts the minutes of its July 30 meeting, where it held the key rate at a record-low 1.75%. Local observers see a hike -- the first since 2016 -- as soon as October.

On Wednesday, Brazil’s central bank has been clear that it will raise its key rate for a fourth straight meeting, with most analysts expecting a full-point hike to 5.25%. The consensus is for 200-to-225 bps of additional tightening in this cycle.

Colombia inflation for July, out Thursday, may show a slight pick-up although the headline figure is seen remaining well within the target range. In Chile, where the central bank has begun to tighten, the July consumer price data out Friday becomes somewhat less critical for now.