The confusion around Facebook Inc.’s new name has been good news for one exchange-traded fund with a fortunate ticker.

The US$142 million Roundhill Ball Metaverse ETF, which trades under the ticker META, saw an inflow of about US$14 million, according to an early tally from the firm. It was the biggest influx for the fund since the start of September, data compiled by Bloomberg show, and trading volume in the ETF’s shares surged to a record high after the announcement.

So some market watchers see a case of mistaken identity.

“While the ETF has exposure to what the company currently known as Facebook is focusing on, some investors likely sought out the ticker without doing as much homework,” Todd Rosenbluth, head of ETF and mutual fund research at CFRA, wrote in an email. “We will see if the assets stick around or if upon realization the hot money fades away.” 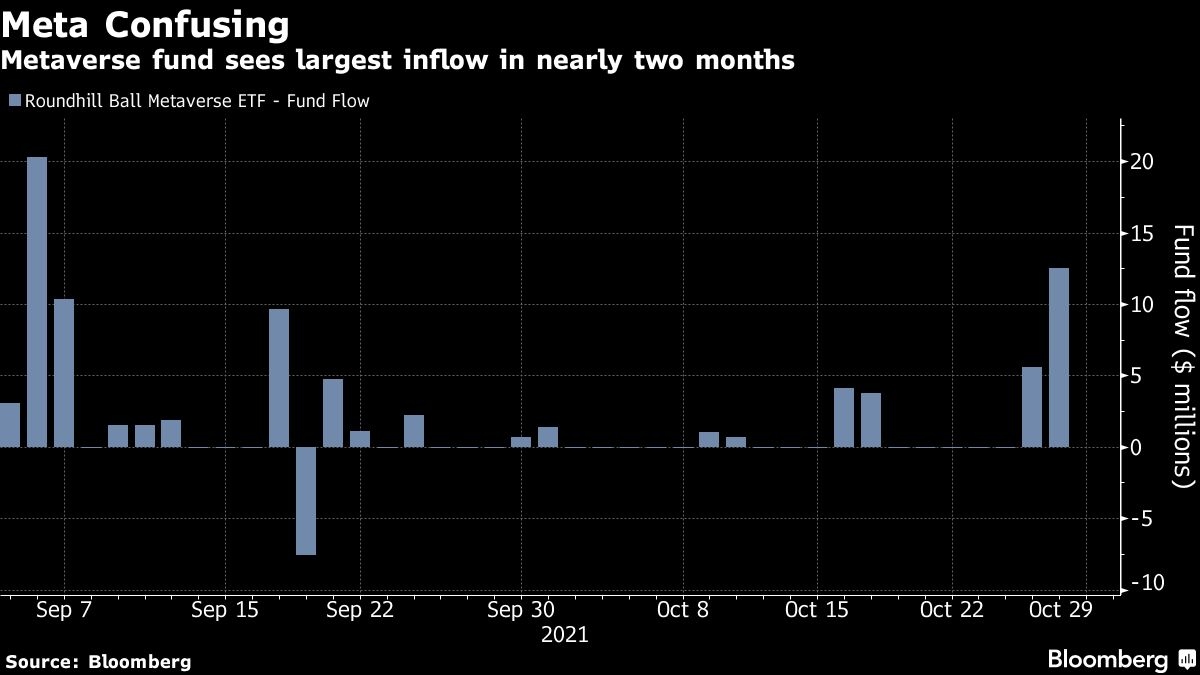 On Thursday, Facebook CEO Mark Zuckerberg announced the social media company was renaming itself Meta Platforms Inc. and would use the ticker MVRS starting in December. The name change is the most definitive signal so far of the company’s intention to stake its future on the metaverse, an idea born in the imaginations of sci-fi novelists.

Pundits were quick to point out the confusion it could create as the word “meta” has numerous meanings in different languages. The Twitterverse, meanwhile, was quick to mock the re-branding, pointing out that it throws the popular Faang moniker used to describe the biggest tech giants into disarray.

On Stocktwits, a user pointed out the ticker confusion the name-change could cause:

Mistaken identity cases are not new in the world of finance -- traders often confuse similar-sounding names and tickers. When Elon Musk, for instance, tweeted about the Signal app, shares of a tiny medical device company with a similar name surged 5,000 per cent.

To be sure, an argument can be made that Facebook’s stunt can be seen as bullish for the stocks in the ETF, said Mohit Bajaj, director of ETFs at WallachBeth Capital. But “most of the volume in META occurred after the Facebook name-change announcement,” he said. “It might be investors accidentally trading the wrong symbol.”