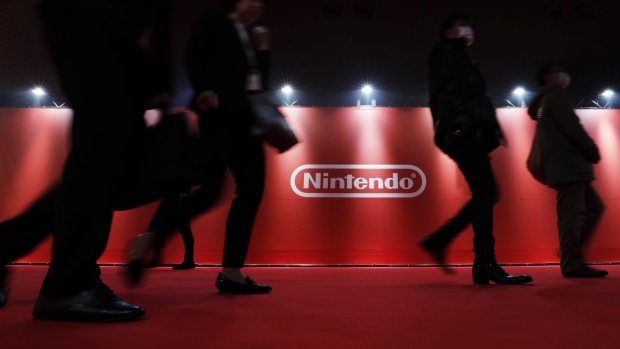 Attendees walks past a sign for Nintendo Co. displayed ahead of an unveiling event for the company's Switch game console in Tokyo, Japan, on Friday, Jan. 13, 2017. Nintendo is counting on the Switch to end years of pain at its console division, which released a successor to the popular Wii in 2012 that flopped. Photographer: Kiyoshi Ota/Bloomberg , Bloomberg

(Bloomberg) -- Microsoft Corp. and Nintendo Co. agreed to a 10-year deal to bring Call of Duty to Nintendo gaming platforms, signaling a willingness to share one of the game industry’s most important titles at a time of growing consolidation in the industry.

The agreement depends on Microsoft closing its $69 billion acquisition of Activision Blizzard Inc., the Redmond, Washington-based company said. The duration of the deal can be further extended after the initial period and Microsoft is committed to expanding the number of platforms on which people can play games, Xbox chief Phil Spencer told Bloomberg News. Microsoft also said it’s committed to offering Call of Duty on Valve Corp.’s Steam platform at the same time as it’s released on Xbox.

The company has extended a similar offer to Sony Group Corp., to bring the famous Activision franchise to PlayStation consoles for a decade, but that has so far been rebuffed by the Japanese company, Spencer said. Sony has fiercely objected to the Activision acquisition, primarily because of concerns the US tech giant could make content like Call of Duty exclusive to its own gaming services.

“This deal and especially its timing clearly looks like Microsoft trying to appease regulators,” said Tokyo-based analyst Serkan Toto. “I have a hard time imagining recent mainline Call of Duty titles running on current Nintendo hardware, but the next Switch will certainly be able to handle such a game.”

Microsoft executives are set to meet with US Federal Trade Commission Chair Lina Khan and other commissioners Wednesday to make its final case in support of the deal.

“Our intent is to become more relevant on more screens,” Spencer said. “We have a pretty good idea of how to build a win-win relationship with Nintendo and frankly Sony.”

Nintendo shares in Tokyo erased losses on the day and were up as much as 1.5% after the announcement. Sony widened losses to 1.3%.

Representatives of Nintendo and Sony Interactive Entertainment declined to comment.

Spencer remains confident that Microsoft’s Activision takeover will be approved by regulators, with the company setting a timeline of getting that deal done by the end of its fiscal year, which is in June. He sees the steps taken by Microsoft with Nintendo and Valve — assuring them of the prized asset for their competing gaming platforms — as a signal of Microsoft’s push to be inclusive and distribute its portfolio of gaming content widely.

“There’s been one game industry participant that’s really been raising all the objections, and that’s Sony, and they’ve been fairly public about the things that don’t meet their expectations,” Spencer said. “From where we sit, it’s clear they’re spending more time with the regulators than they are with us to try and get this deal done.”

Outside of Sony’s objection to the Activision acquisition, Microsoft has seen “a lot of support from the industry,” he added.

--With assistance from Dina Bass, Takashi Mochizuki and Yuki Furukawa.