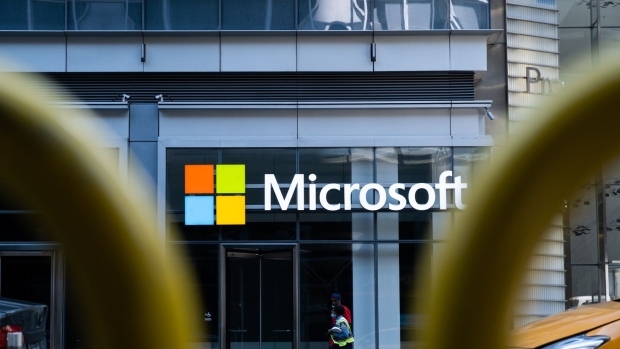 Pedestrians wearing protective masks walks past a Microsoft Technology Center in New York, U.S., on Wednesday, July 22, 2020. Microsoft Corp. is set to post quarterly results after the closing bell and the tech bellwether's performance will likely uphold its standing as a darling of Wall Street. Photographer: Jeenah Moon/Bloomberg , Bloomberg

Microsoft released patches for the flaws in a blog post announcing the hack.

Previously undiscovered vulnerabilities are known as zero days, and they are valuable to hackers because there aren’t defenses against them -- at least until they are discovered and patches are created.

“We are sharing this information with our customers and the security community to emphasize the critical nature of these vulnerabilities and the importance of patching all affected systems immediately,” the company said.

The hackers responsible are “a group assessed to be state-sponsored and operating out of China,” according to the blog. They typically target “entities in the United States across a number of industry sectors, including infectious disease researchers, law firms, higher education institutions, defense contractors, policy think tanks, and NGOs.”