Millennials must use COVID as an opportunity to prepare for their future: Financial planner

Millennials spent their early adulthood dogged by two large recessions, rising housing prices and exploding student debt. It's no wonder they're less likely, even as they approach 40, to have many of the traditional trappings of adulthood, including marriage and homeownership. But a closer look at the data and a more inclusive definition of wealth reveals this often-maligned group is doing quite well. In fact, most are doing better than previous generations.

In modern history, each generation has typically been richer than the last. If millennials are falling behind, it could be a sign of the end of a multi-generational boom in prosperity. But comparing generations is hard. In large part because as the world changes, so do the markers of success, and we make different choices to thrive.

In other words, things are different since the baby boomers were young. Getting paid a decent salary and having stability now often requires some education or training beyond high school. For most, thriving in a career means living in a large metropolitan area that offers better job options and a network of talented peers that further your skill set. Millennials also need to invest and save for themselves for retirement. It's debatable whether all these changes are positive. But when you consider them as a whole, millennials’ portfolios don’t look so bad. They simply made choices in response to a new economy. 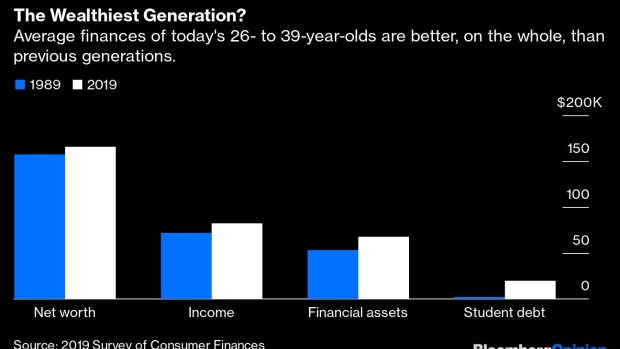 Take the high levels of debt. Millennials have almost twice as much debt as their parents did at their age. But this is mostly student debt, reflecting that they made an investment in their future earnings. As the economy changes, more education has become necessary for higher pay. According to data from the Federal Reserve Bank, about 69 per cent of millennials had some education beyond high school, compared with 54 per cent of boomers.

True, millennials paid higher tuition than their parents. And the salary premium from going to college has fallen since the 1980s as more people get a degree, making them a little less valuable. There's also evidence that starting wages are lower and may grow more slowly when you control for education. But that income has become more valuable.

In finance, an asset is worth more when it's more predictable, and wages are much less variable than they used to be. Before, wages swung around as people changed jobs and worked more hours. But over time, people changed jobs less frequently and worked less. This helps explain why wages have stagnated, because in the past, increases were partly driven by more moving around and less secure positions. An asset that pays predictable income each year is more valuable than a riskier asset because knowing how much you’ll be paid (or have to pay) each year is desirable, whether you are an investor or a worker. This is why junk bonds cost less than U.S. Treasuries. So when you account for less risk and more stability, a millennial’s reliable US$1 wage in 2021 is worth more than an erratic boomer wage in 1991 that might swing from 50 cents to US$1.50.

Education has contributed to that stability. The more education you have, the shorter, less frequent periods of unemployment you face. In the new economy we’ve traded risk for stability. It's debatable if it’s worth the trade-off, but you can’t deny there is value in less risk. And in this new world, investing in yourself (or your education) is often the smartest investment you can make.

It's also true millennials are less likely to own a home: 48 per cent of 26- to 39-year-olds are homeowners today compared with 52 per cent in 1989, according to Fed data, and home prices are much higher. But that also reflects some reasonable choices. Before the pandemic, at least, higher wages and better skills development were found in large urban areas. These places also had higher home prices, in part because of demand and also because of policies that limit development. So if you live somewhere you can’t afford to buy a home, it might be because you live somewhere that puts your career on a fast track.

Millennials may have more debt, but they also have more financial assets — about 25 per cent more than their parents did at their age. This is partly because they are more likely to have a retirement account at work, since these savings vehicles are more common than traditional pensions used to be. You could argue traditional pensions were better, but they were also harder to come by: 86 per cent of millennials have some kind retirement plan, compared with 73 per cent of boomers at their age.

The world has changed since the 1980s. Investing in your skills and in financial assets for your retirement may simply make more sense than owning a house because getting ahead requires more education and living in a city. Again, we can debate how much of that change is positive, and whether it's driven by policy choices, such as restrictions on housing, or just changes in the global economy that put a higher premium on skills learned in school.

Maybe the pandemic will change some of these trends. But you can’t blame or pity millennials for making choices that reflect the economy they live in. Homeownership is overrated anyway.