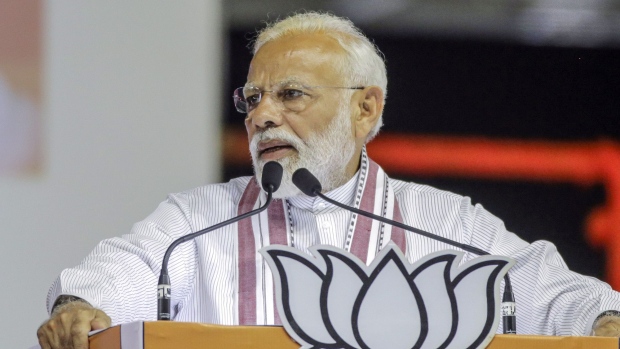 Prime Minister Narendra Modi warned the “age of expansionism” was over, as he addressed troops involved in a bitter border standoff with China in the Himalayan region.

Speaking in the Ladakh region, that’s witnessing the country’s deadliest conflict with Beijing in four decades, he underlined India’s progress in developing border infrastructure and his government’s backing for the army.

“The age of expansionism is now over. This is the age of development,” Modi told soldiers at an army base in Ladakh, the epicenter of India’s border conflict with China where 20 Indian soldiers and an unknown number of Chinese troops were killed in a violent clash last month. “In past centuries expansionism has hurt the world the most.”

Since early May Indian and Chinese troops continue to remain locked in a standoff along their contested and unmarked Himalayan border. About 50 square kilometers (20 square miles) previously controlled by India in the Pangong Tso area -- a glacial lake high on the Tibetan plateau -- is now being held by Chinese personnel, according to Indian officials.

“The courage that you and your colleagues have shown now has sent the message to the whole world about India’s true strength,” Modi told the soldiers even as concerns remain about the border tensions lingering on. Three rounds of talks between senior military officials on both sides, meant to de-escalate hostilities, have so far ended inconclusively. Officials on both sides have said that more diplomatic and military talks are planned in the future to help lower the temperature.