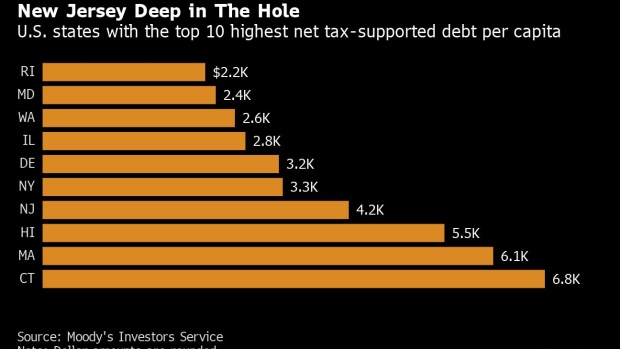 (Bloomberg) -- Heading into his third year as New Jersey’s governor, Phil Murphy is set to appeal again for a tax boost on millionaires and retail sales to help fund his progressive wish list for 2020.

Murphy, 62, will outline his priorities in his annual State of the State speech on Tuesday, at a time when his relationship with legislative leaders is tenser than ever. Since he succeeded Republican Chris Christie, giving New Jersey one party in control of both the governor’s office and the legislature, Democrats have splintered over how to fund education, transit and other priorities in one of the most taxed states in the nation.

“The millionaires tax, the sales tax -- none of this stuff gets to what you need,” Senate President Steve Sweeney said in an interview. “I want to fix things, and raising taxes is not the magical mystery carpet that we’re all going for a ride on.”

The speech comes weeks after Murphy became chairman of the Democratic Governors Association, giving New Jersey a national spotlight in a crucial election year. The split between moderates and progressive wings of the party echoes the divide among Democrats seeking to oust Republican President Donald Trump. Murphy’s success at home may determine his influence in national politics.

The political divide among New Jersey Democrats has stalled some of Murphy’s priorities, including marijuana legalization and a revamped tax-incentive program. Even party outsiders say Murphy, a retired Goldman Sachs Group Inc. senior director and former U.S. ambassador to Germany, is at odds with the lawmakers who could most boost his agenda.

“He won’t do deals,” said Assembly Minority Leader Jon Bramnick, 66, a Republican from Westfield who may run for governor in 2021. “He won’t compromise.”

Murphy on Dec. 19 signed legislation allowing undocumented immigrants to apply for driver’s licenses, which was endorsed by Sweeney and Assembly Speaker Craig Coughlin. Earlier last year, Murphy signed other bills they backed, including a package to combat hunger; a minimum-wage increase to $15 by January 2024; and expanded paid family leave.

“In all fairness, we have passed a whole bunch of bills that he signed,” Sweeney said.

But Sweeney was angered when companies in his southern New Jersey base became a focus of a Murphy-appointed panel to investigate the state’s $11 billion business-incentives program.

More than $1 billion went to entities controlled or linked to Sweeney ally George Norcross, an insurance executive who holds no public office, but is one of the most powerful political figures in New Jersey. Norcross has said he has done nothing improper, and that the incentives helped spark a rebirth in Camden, one of the nation’s poorest cities.

Amid the bickering, two major incentive programs have expired and have yet to be replaced.

By year’s end, Murphy plans to have borrowed at least $2 billion for New Jersey Transit, school projects, library construction and lead-free drinking water. The administration says it’s a good time to go to the municipal-bond market because rates are low.

Democrats agree the money needs to be spent. At the same time, New Jersey’s bonded debt as of June 30, 2018, was roughly $45.2 billion, with required annual payments in excess of $4 billion.

“The bond issuances in the pipeline for this fiscal year will address some of the state’s most critical priorities,” Jennifer Sciortino, a spokeswoman for the state treasury department, said in an email. “The state’s overall debt load will remain relatively unchanged given that we retire more than $2 billion in bond principal each fiscal year.”

The governor in 2018 sought a surcharge on incomes of $1 million or more, but in the face of a government shutdown over the lack of a budget, he accepted a $5 million threshold and a defeat on his sales-tax increase. Last year, lawmakers again said no to a millionaire’s tax, and they blocked restoring the sales tax to 7%, from 6.625%.

Murphy says the state would raise $447 million annually from millionaires, and at least $500 million from a higher sales tax. New Jersey could use the money: For the current fiscal year, Murphy made a record $3.8 billion pension payment, and almost 16% more is due in July.

“Governor Murphy is committed to building on the progress the administration has made during our first two years and continuing to build a stronger and fairer New Jersey for every family, not just the wealthy and well-connected,” Matt Saidel, a Murphy spokesman, said in a statement. “He will continue to call on the wealthiest New Jerseyans to pay their fair share, which would bolster the middle class and encourage New Jersey’s expanding economy to thrive.”

Some measures show the state remains in poor fiscal shape. For the fifth straight year, New Jersey’s long-term finances ranked worst among U.S. states, according to a 2019 report by Truth in Accounting, a Chicago-based group that analyzes government debt and spending.

Murphy’s mantra is to make New Jersey “stronger and fairer,” with a middle class built on good-paying jobs.

For the year ending Nov. 30, employment rose by 34,300 jobs, according to the state labor and workforce development department. For that month, the leisure and hospitality industry -- with tourism a key contributor -- grew the most, with 3,800 jobs.

Still, New Jersey business owners suspect that some of Murphy’s policies, including a higher minimum wage and paid leave, ultimately will drive down the good numbers.

“We already start as being last in the region when it comes to the cost of doing business and the cost of taxes, and you pile on more mandates -- so you’re not just last and you’re not just an outlier, but you become an extreme outlier,” Michele Siekerka, president and chief executive of the New Jersey Business & Industry Association, a Trenton-based lobbying and research group, said by telephone.

The $15 minimum-wage bill signed in February, she said, lacked a temporary hold in the event of a recession, an impact study and a tax credit for businesses that hire teens, particularly in tourism, which employs about one in 10 New Jerseyans in casinos and resorts, at Atlantic Ocean boardwalks and elsewhere.

“Youth are going to be knocked out of the box and the tourism industry will suffer,” Siekerka said.

To contact the editors responsible for this story: Flynn McRoberts at fmcroberts1@bloomberg.net, William Selway, Stacie Sherman