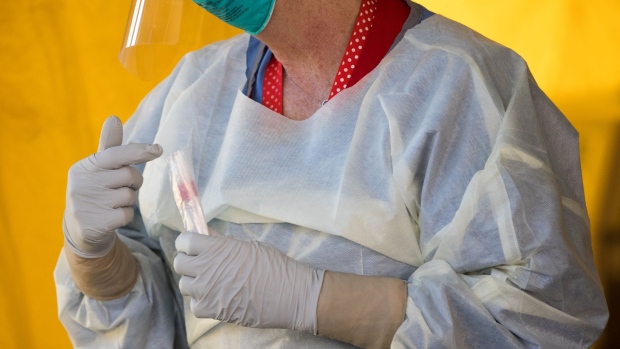 After National Basketball Association player Rudy Gobert caught the coronavirus, he wondered whether others had suffered the same loss of smell and taste he experienced.

Turns out many have. A sudden, unexplained loss of these senses is an early symptom reported among COVID-19 patients in South Korea, China and Italy, according to ENT UK, which represents ear, nose and throat surgery professionals in the U.K. Either total or partial loss of smell, known medically as anosmia, may be an initial telltale sign of COVID-19 infection.

Just to give you guys an update, loss of smell and taste is definitely one of the symptoms, haven’t been able to smell anything for the last 4 days. Anyone experiencing the same thing?

The feature is important because it might help identify people at risk for the coronavirus infection who require testing and isolation, as well as alert surgeons to cases where conducting transnasal and sinus operations could be hazardous. Fourteen people were infected after a patient in China with the coronavirus underwent endoscopic pituitary surgery, likely dispersing the virus from the nasal cavity.

“It’s evidence that’s emerging day by day,” said Simon Carney, professor of ear, nose and throat surgery at Flinders University in Adelaide, South Australia, in a phone interview. “It’s important that this information be put in the public domain” for health authorities to review.

French basketball player Gobert, who plays in the NBA for the Utah Jazz, is reported to have tested positive for the pandemic-causing coronavirus in mid-March.

Anosmia is a symptom that occurs frequently after cold-like viral infections. But it’s not included in the definitions that health-care workers use to identify possible Covid-19 cases, according to Carney.

Often the sensory loss occurs in coronavirus patients in the absence of other symptoms. It may be driven by the fact that the highest concentrations of the virus can be detected in patients’ nasal cavities around the time they develop symptoms.

“It is these ‘silent carriers’ who may remain undetected by current screening procedures, which may explain why the disease has progressed so rapidly in so many countries,” said Carney, who is the outgoing president of the Australia and New Zealand Rhinologic Society.

In Germany, more than two-thirds of confirmed cases have reported anosmia, UK ENT said. In South Korea, where testing has been more widespread, 30 per cent of patients testing positive have had it as their major presenting symptom in otherwise mild cases.

The number of reports of patients complaining about anosmia in the absence of other symptoms is “rapidly growing,” said Claire Hopkins, president of the British Rhinological Society and professor of rhinology at King’s College London. She cited reports from doctors in Iran, the U.S., France and northern Italy in a letter posted on March 21 on ENT UK’s website.

Hopkins said she saw four patients aged under age 40 with the condition in a week who were otherwise asymptomatic.

“I usually see roughly no more than one a month,” Hopkins said. “I think these patients may be some of the hitherto hidden carriers that have facilitated the rapid spread of COVID-19. Unfortunately, these patients do not meet current criteria for testing or self-isolation.”