The streaming wars are leaving smaller programmers and studios faced with the inevitability of selling to one of the handful of companies set to dominate the world of online video subscriptions: Amazon.com Inc., Apple Inc., AT&T Inc., Netflix Inc. and Walt Disney Co. Deal speculation has mostly centered on movie houses such as Lionsgate and MGM, but the hottest takeover target in streaming is better known for ripping out red carpets than walking them. Discovery Inc. — with its HGTV home-renovation shows, TLC reality dramas, Food Network cooking competitions and modern twists on nature programming — may be just what Netflix needs to stay on top. 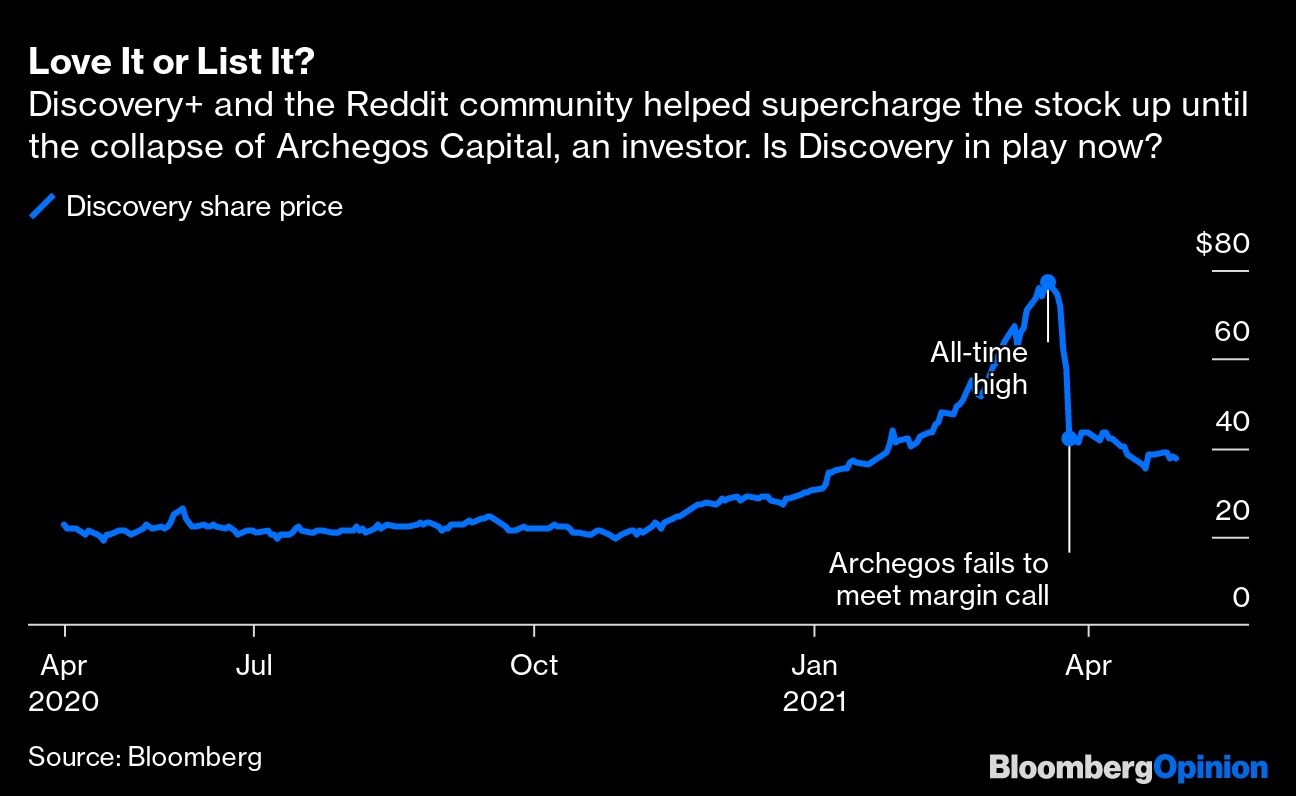 Discovery is a treasure trove of wildly addictive, low-budget reality programs that have spawned passionate superfans. “90 Day Fiance,” which airs on the TLC network, is such a ratings magnet that CEO David Zaslav once mused that it’s the company’s own Sunday Night Football. Meanwhile, streaming giants are plowing billions of dollars per year into what they call “premium content,” the implied bar being scripted series of HBO quality and movies good enough for theaters. But these strategies seem to ignore that there are a great many people simply yearning for more trash TV on streaming apps who have been left disappointed by a lack of options.

That began to change with the January launch of Discovery+. The company said this week that it already has 15 million paying subscribers on its direct-to-consumer platforms and that Discovery+ accounts for the majority. That’s not too shabby. For context, HBO, which has been around nearly 50 years, and its streaming offspring HBO Max together have 44 million U.S. subscribers. Of course, Discovery+ is cannibalizing its own traditional cable networks, and first-quarter profit left shareholders disappointed. At the root of that was a 63 per cent surge in selling, general and administrative costs, likely driven by promoting Discovery+.

The app has a quality that’s missing from Netflix and was appreciated about cable: the ability to tune into whatever’s on and only half-watch. And decision fatigue is such a churn threat that Netflix just introduced the “Play Something” button for “when we just don’t want to make decisions.”

The user engagement that Discovery’s library produces may be helpful for streaming apps looking to improve profitability either through advertising or price increases. And each of its shows — whether it be “My 600-lb Life,” “Naked and Afraid” or “Chopped” — is a pretty enduring franchise, something Netflix, Amazon Prime and Apple TV+ could all use more of.

A victim of the Archegos Capital blowup, Discovery’s stock has also gotten a bit cheaper. Its US$26 billion market value (down from US$47 billion briefly in mid-March) is bite-size for the tech giants; that’s the same amount of cash Amazon’s business threw off in just the past year. Even Netflix’s financial position is strengthening, making it conceivable that the growth-hungry company could soon make its first large acquisition. 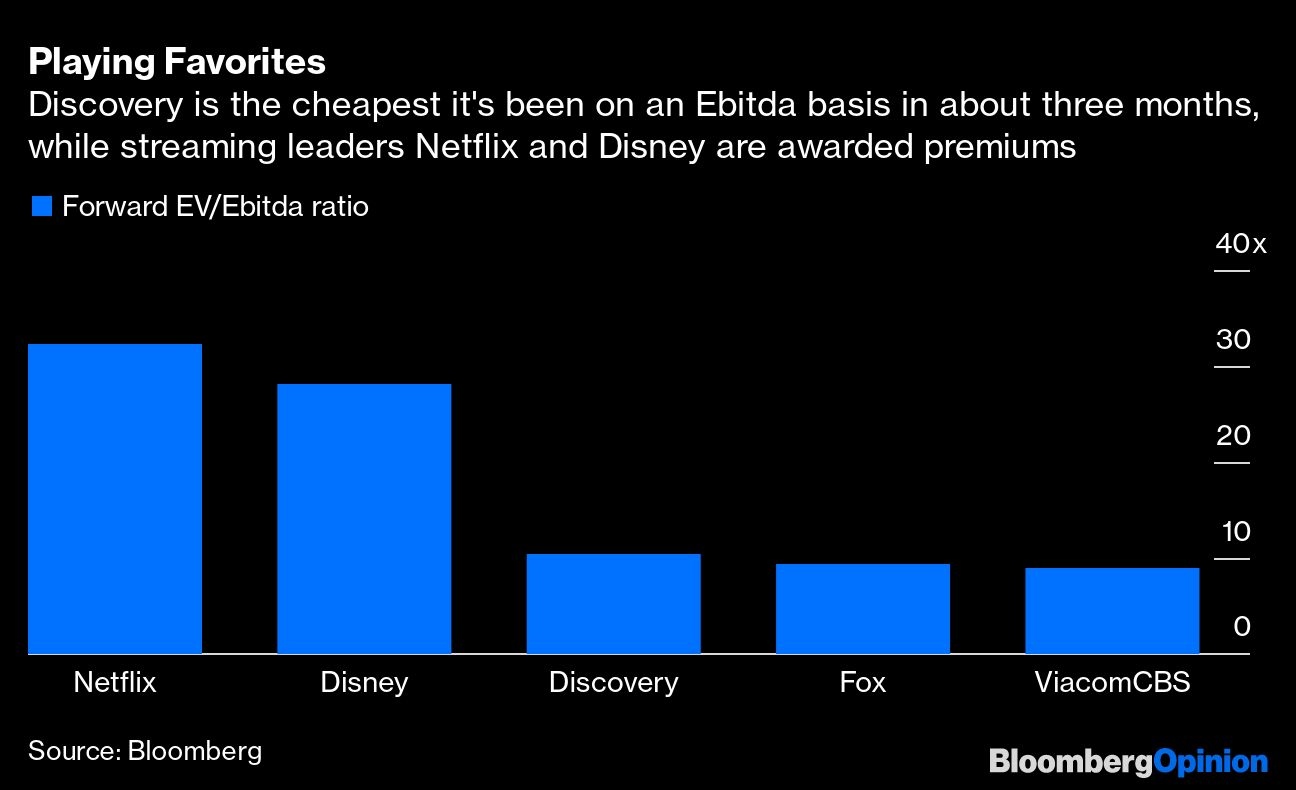 Netflix has only started to dabble in reality TV, though this spring’s return of “The Circle” and “Too Hot to Handle” — two competition shows, the latter quite racy — imply it was happy with the initial reception. Disney+ users, on the other hand, won’t find these types of programs on the strictly family-friendly service. Other apps are focused on scripted content headlined by big actors, such as HBO Max’s “The Flight Attendant” starring Kaley Cuoco, and Jason Sudeikis in “Ted Lasso” on Apple TV+. That’s left Discovery+ as a unique product in a sea of Netflix copycats.

It’s unique in another way, too. Discovery has one of the industry’s most robust international footprints, having spent the last few years acquiring HGTV-parent Scripps Networks, Polish media assets and Eurosport, a pan-European sports network that has broadcast rights to the Olympics. Some of its popular U.S. programs have developed followings abroad, with the company investing in both dubbed and local-language content. As Netflix’s U.S. subscriber growth nearly halts this quarter, international markets are the new focus. Disney+ is also making a big push internationally using its bundle with Star, a new general-entertainment product not available in the U.S.

It’s hard to imagine Discovery+ surviving the streaming wars as a stand-alone product. But its immense library would improve the value proposition of any of the leading apps faster than the occasional big-budget movie can.