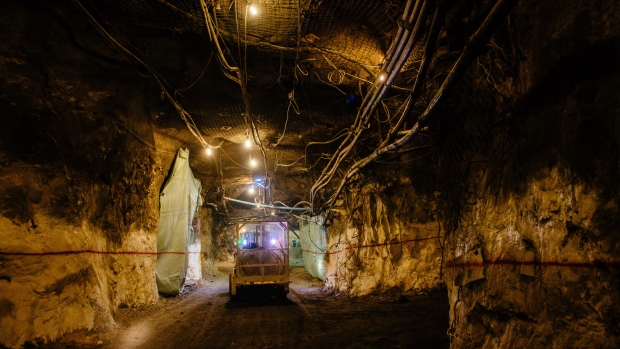 Lights illuminate a mining truck moving through an underground tunnel at a gold mine. , Photographer: Waldo Swiegers/Bloomberg

TORONTO -- New Gold Inc. is reporting lower production from its Rainy River and New Afton gold mines in Canada during the second quarter, in part due to COVID-19 disruptions.

Gold production at Rainy River dropped to 48,800 ounces in the three months ended June 30 from 50,400 ounces in the first quarter after the mine was closed for 12 days so its workers could follow the two-week self-isolation period recommended for those who had travelled outside Canada.

The mine near the U.S. border in western Ontario reopened April 3 after a shutdown made necessary because many local employees had made brief trips across the border into Minnesota.

Meanwhile, at its New Afton Mine near Kamloops, B.C., gold production fell to 15,500 ounces in the second quarter from 16,400 ounces in the first, while copper output slipped to 16.9 million pounds from 18.5 million.

The company says the lower output was due to unexpectedly lower ore grades at the mine, a situation expected to continue this year and possibly into 2021.

National Bank analyst Mike Parkin says in a report the overall production of 98,100 gold equivalent ounces (gold, silver and copper) was below expectations and fell short of 103,400 ounces in the first quarter.