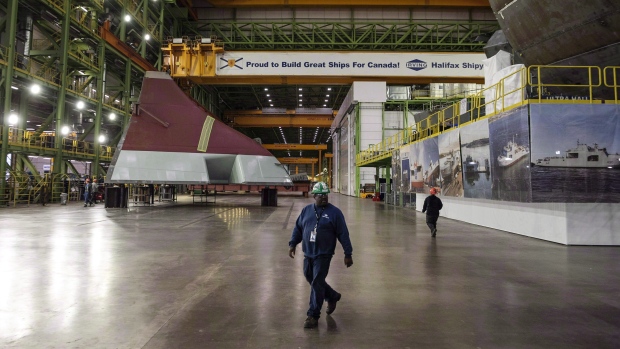 Workers in the assembly hall at the Irving Shipyard following the announcement that the Royal Canadian Navy will receive a sixth Arctic and offshore patrol ship in Halifax on Friday, Nov. 2, 2018. , The Canadian Press

OTTAWA - Parliamentary budget officer Yves Giroux is predicting that a new fleet of warships to be built for the Royal Canadian Navy will cost $17 billion more than the federal government's estimate.

Giroux says building the 15 new warships modelled on the British-designed Type-26 frigate, which are to form the Navy's backbone for most of the century, will cost $77 billion in all.

The Liberal government in 2017 set the project's budget at $60 billion, a number that defence officials reiterated in an interview with The Canadian Press last month.

Giroux's estimate is in a new report released this morning and is likely to increase pressure on the government to change directions to keep the project's costs under control.

To that end, Giroux's report looks at several other potential scenarios should the government decide to change directions.

While some alternatives do not present much in the way of savings, the budget officer did find that switching from the state-of-the-art Type-26 frigate to smaller Type-31s, or building a combination of both, could save as much as $50 billion.