Nike 'working to identify the issue' after basketball shoe mishap

Nike Inc. (NKE.N) is looking into what went wrong after college basketball’s biggest star sprained his knee when his shoe fell apart, one of the most high-profile apparel failures in basketball history.

The fallout for the world’s largest sportswear brand was immediate. Twitter lit up with jabs from fans and rival brands, making “Zion” and “Nike” trending topics within the social media network. The company’s stock fell as much as 1.7 per cent in New York trading Thursday.

Nike watching Zion‘s foot rip through their shoe and get injured pic.twitter.com/h0kBNjhfxG

“We are obviously concerned and want to wish Zion a speedy recovery,” Nike said by email. “While this is an isolated occurrence, we are working to identify the issue.”

While the incident, which occurred during one of the most anticipated college basketball games of the year, is certainly embarrassing, it likely won’t affect Nike’s prominent standing within the sport, according to Bloomberg Intelligence analyst Chen Grazutis. If you combine Nike and its Jordan brand, the company has more than 90 per cent of the basketball market. Nike reported US$4.35 billion in wholesale equivalent basketball sales in fiscal 2018, about 14 per cent of its overall sales.

“They might get a lot bad press over the next couple days, but I don’t think it will have a direct impact on the shoes,” Grazutis said.

Companies like Nike and Adidas pay tens of millions of dollars for the exclusive right to outfit high-profile college programs like Duke, meaning their athletes are required to wear uniforms and shoes made by the team’s sponsor. Though Duke’s contract with Nike isn’t public, the Durham school is one of Nike’s most important basketball partners. For comparison, the University of Kentucky, another top basketball school, recently extended its Nike deal for eight years and US$30.6 million.

Hope young fella is ok! Literally blew thru his 👟. 🙏🏾

The malfunction might also hurt Nike’s ability to sign Williamson once he decides to go pro. College athletes can’t sign endorsement deals, but competition for elite draft prospects is fierce every year. Last year’s No. 1 pick, Deandre Ayton, signed a deal with Puma SE that was reported to be the largest rookie deal since Kevin Durant’s seven-year, US$60 million deal with Nike back in 2007.

Williamson is one of the most highly regarded college prospects in years. The 6-foot-7, 285-pound forward suffered a mild knee sprain, according to Duke coach Mike Krzyzewski. He did not return to the game, and No. 8 UNC upset No. 1 Duke 88-72.

The timing could not have been worse for Nike. Not only was the game televised nationally on ESPN, it was one of the most anticipated college basketball games of the year. The cheapest resale tickets leading up to tip-off were over US$2,500, approaching Super Bowl levels.

Former President Barack Obama, courtside at the high-profile clash, was shown on video appearing to say with an incredulous look: “His shoe broke!”

It also comes as Nike draws criticism for a different kind of shoe malfunction. Some people who purchased the company’s newest basketball creation, a laceless shoe that you can control with your phone, were unable to connect to the Android version of the app.

This isn’t the first time that Nike’s had problems with its basketball merchandise. After taking over as the official NBA uniform supplier in 2017, multiple stars including LeBron James had their jerseys rip.

Nike stock is up about 25 per cent in the past year, similar to the gains of Puma and Under Armour Inc. while leading the roughly 12 per cent gain of Adidas AG.

Puma is an upstart in the basketball market, and one of its few NBA players, Terry Rozier of the Boston Celtics, took advantage of Nike’s stumble to urge others to join him. 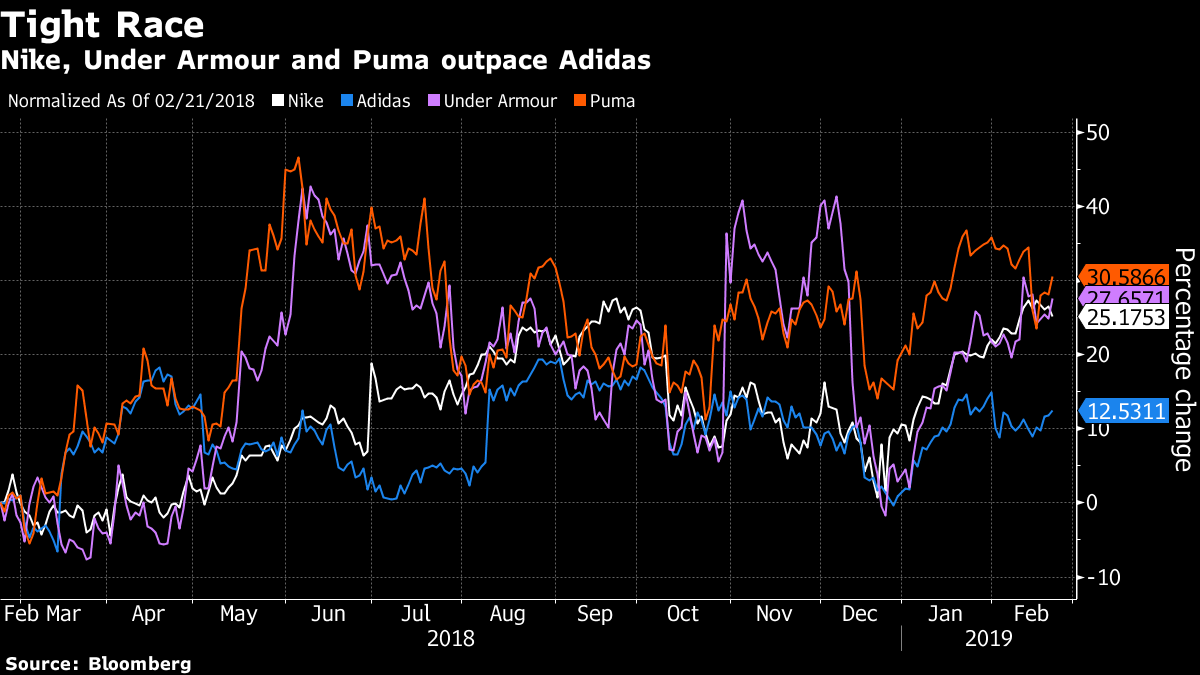