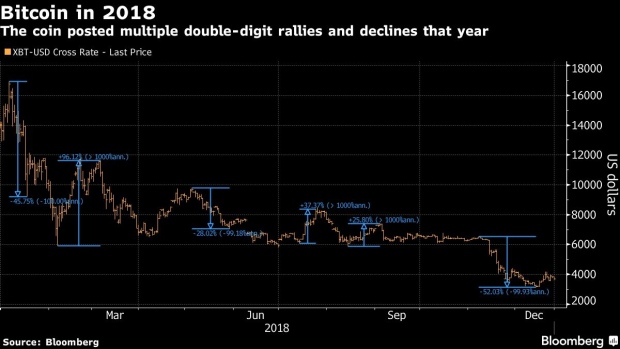 Mike Novogratz, chief executive officer of Galaxy Investment Partners, during the Bloomberg Equality Summit in New York, U.S., on Tuesday, March 22, 2022. The event convenes leaders to discuss the progress on pledges, policies and programs that are creating a more equitable workplace and society. , Bloomberg

(Bloomberg) -- Everyone knows crypto’s been having a tough time of late. Bitcoin’s lost a third of its value this year, and altcoins are faring even worse with prices sliding again Friday. Despite calls within the community -- propagated largely over Twitter -- to hoard more coins whenever there’s a selloff, market-watchers say to be wary of predictions that call a bottom to the slide.

Mike Novogratz, the founder of Galaxy Digital Holdings Ltd. who this week issued a mea culpa over Terraform Labs’s imploded stablecoin, noted that some smaller tokens are down 80% from their highs. And should their losses accelerate to the same degree they did in 2018, those coins could lose an additional 70%.

“My point is picking bottoms is dangerous,” he tweeted. “And if you do scale in slowly.”

Cryptocurrencies have suffered this year, undergoing a dark stretch that’s affected just about every corner of the market. Bitcoin and Ether are down 50% each since November, when many coins peaked, while XRP, Dogecoin and Solana have all lost roughly 70%. Shiba Inu is down 80%. And investors are also souring on NFTs and other crypto-centric offshoots.

It’s all happening as the Federal Reserve, in its attempt to bring inflation back to 2%, raises interest rates and tightens the loose monetary conditions it had put in place to deal with the pandemic. Stocks and bonds have also sold off this year as investors try to figure out whether the central bank’s actions will induce the economy into a recession.

“The move so far has been correlated to the broader macro market moves,” Mathew McDermott, global head of digital assets at Goldman Sachs, said of the crypto markets.

That hasn’t kept some from saying that now is a good time to buy digital assets at a discount -- Twitter is rife with such posts. Nor have predictions ceased, after more than $1 trillion has been erased in crypto-markets value since the fall, that the bottom is in.

The plunge in prices on May 12, amid TerraUSD’s breakdown, “signaled clear tendencies of extreme and irrational fears,” according to a research note by BlockFi and Arcane Research. Funding rates reached lows not seen since July as liquidations spiked, all while spot volumes remained elevated. “All these events suggest that the current selloff could be nearing a point of saturation,” the report said, though it added that assessing the crypto market without consideration for what’s going on with broader risk assets is “likely unwise.”

Recession or not, crypto prices could have further to fall, according to Mike Belshe, founder and CEO of BitGo. “Even if the economy avoids a downturn, I’m confident that prices will collapse and the exuberance will subside,” he said in an interview. “This would be more pronounced if we enter into a recession.”

“We haven’t had them go through a real recession and the question I ask myself is, if you take Bitcoin now, what is the greater probability? That it will double in value or that Bitcoin will halve in value?,” Jonathan Macey, professor at Yale Law School who studies corporate finance, said by phone. “And I think the odds are that it’s going to halve in value.”

It’s difficult to say what event or news could help Bitcoin and other risky assets start to form a floor. Many are scouring charts and sentiment readings, though some have turned to history. The coin offers many case studies. Bitcoin’s peak-to-trough decline in 2018, for instance, exceeded 80%. That year, the coin posted multiple double-digit rallies and declines.

“I wouldn’t look for a sustainable rally there until the Fed’s getting ready to lower rates again,” David Donabedian, chief investment officer of CIBC Private Wealth Management, said by phone. “And that’s quite a ways away.”

That’s an argument that’s often heard in the crypto space: Exuberance can spawn many new projects, some of which can be sketchy or outright scams -- downturns can help wring out excesses.

“While I don’t see Bitcoin dropping to $20,000, if the price of Bitcoin does continue to decline, it would help filter out weaker projects and allow us to focus more on projects with more long-term viability,” he said. “I don’t welcome a recession -- it does have real impact on people’s lives, which is unfortunate. That said, crypto is not responsible for a recession in this case.”