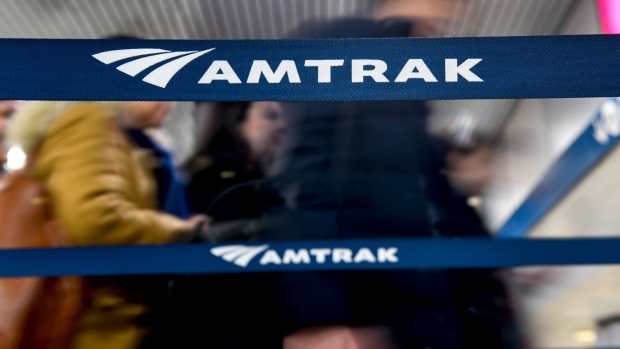 Travelers stand on line to board an Amtrak train at Pennsylvania Station in New York, U.S., on Thursday, Feb. 28, 2019. Amtrak, along with three New York City-area mass-transit agencies and two members of the U.S. House of Representatives, say there is no known alternative plan should the Hudson River tunnel close, cutting off the national railroad's busiest route and blocking thousands from their workplaces. Photographer: Ron Antonelli/Bloomberg , Bloomberg

The U.S. Army Corps of Engineers permit allows the digging of a new tunnel under the Hudson River, the Gateway Development Commission said in a statement Wednesday. The project includes repairing the current link -- 110 years old and eroded by seawater -- which is a major part of Amtrak’s Northeast Corridor line, carrying more than 2,200 daily trains between Washington and Boston.

“This step brings us much closer to the beginning of construction on the Hudson Tunnel Project, which is part of the single-largest critical infrastructure effort in the nation,” New Jersey Governor Phil Murphy said Wednesday in a statement.

The $12.3 billion Gateway project stalled under former President Donald Trump, but has received key federal approvals this year. New York and New Jersey are splitting funding with the U.S. government.

President Joe Biden and Transportation Secretary Pete Buttigieg have both called Gateway a priority, naming it as an example of the work enabled by the infrastructure law passed this month that includes $550 billion to rebuild roads, bridges and mass transit. But officials need the Federal Transit Administration to approve a $5.6 billion grant to help finance it.

“The Gateway project will help support the economic prosperity of New York and the rest of the country for years to come,” New York Governor Kathy Hochul said in the statement.

Officials anticipate major construction on the new tunnel will begin in August 2023 once funding is in place, and take 12 years to complete.