Larry Berman: A look at the commodity surge in markets

Oil climbed to the highest in two years with optimism building around the comeback of fuel demand in regions such as the U.S., even as COVID-19 flare-ups persist in parts of Asia.

Futures in New York advanced 1.4 per cent on Monday to the highest since April 2019. The U.S. and China, along with parts of Europe, are rapidly recovering from the pandemic as vaccinations increase, overshadowing concerns around weaker consumption in India. In the U.S., the number of passengers at airports jumped to the highest since the pandemic began, a sign of the domestic travel revival that’s leading the way in a jet fuel demand rebound.

For the U.S., “the consensus is building around a very strong summer demand period,” said John Kilduff, a partner at Again Capital LLC. “The supply and demand balance is going to be a little short as we get deeper into the year,” supporting prices. 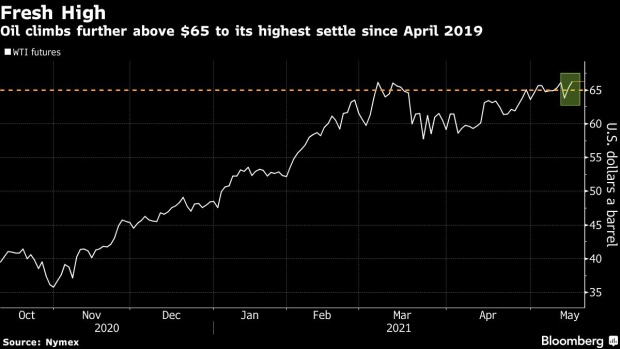 Oil’s rally of more than 4 per cent this month comes as even the hardest-hit parts of the oil market -- namely, jet fuel -- are showing signs of a revival. The number of people passing through Transportation Security Administration checkpoints at U.S. airports surged to 1.85 million on Sunday -- the highest since March 2020 -- pointing to the recovery in domestic U.S. air travel that’s seen underpinning a summer surge in jet fuel demand. United Airlines Holdings Inc. on Monday said it plans to operate 80 per cent of its pre-pandemic U.S. schedule.

“More reopenings in Europe, consumer confidence and travel normalizing” are all boosting confidence in a demand rebound, said Phil Streible, chief market strategist at Blue Line Futures LLC in Chicago. In the U.S., “more and more people are getting vaccinated and those people are now traveling.”

The recovery underway in the U.S. is helping offset a tepid recovery in Asia, where the coronavirus is crippling key importer India and Singapore and Taiwan are grappling with new outbreaks. Another wildcard is the prospect of more crude flows from Iran as the nation seeks to revive a nuclear deal and free itself of U.S. sanctions. Talks are ongoing, however, and progress on a solution remains uncertain.