Oil rallied above US$114 as a global squeeze on refined products prompted concerns about summertime supplies and continued to pull fuel prices higher.

West Texas Intermediate rose 3.4 per cent to the settle at highest level since late March. U.S. gasoline futures topped US$4 a gallon for the first time ever, while the national average retail price rose to a fresh record. Rising futures tend to trickle through to the pump quickly, signaling more pain for drivers when the summer driving season starts at the end of this month.

“The stronger products get, the more optimistic the market gets on crude runs increasing this summer,” said Scott Shelton, an energy specialist at TP ICAP Group Plc. 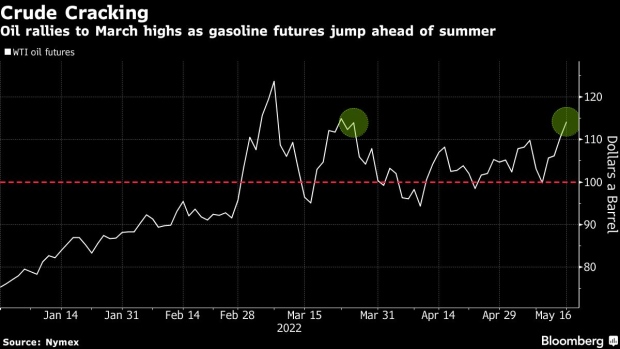 Buying in U.S. timespreads -- or the difference between contracts for immediate delivery and those in the future -- picked up thanks to a decline in stockpiles at Cushing, Oklahoma. Inventories at the storage hub fell by about 2.629 million barrels in the week to May 13, traders said citing Wood Mackenzie data. The prompt spread widened to as much as US$2.45, the largest gap since March.

The tightness in U.S. inventories put the day’s session on a rallying course. Earlier, futures retreated as China’s industrial output and consumer spending slumped in April to the worst levels since the pandemic began, while apparent oil demand and crude processing plunged. Strict lockdowns to halt the virus have curbed fuel use.

Shanghai has been one of the hardest hit by virus restrictions, but there may be some relief on the horizon. The city reported a second day of no COVID-19 cases outside quarantine, putting it on the brink of meeting the three days of zero community transmission required to start easing a punishing lockdown.

European Union foreign ministers meet in Brussels on Monday to discuss the next round of Russian sanctions and diplomats have floated the idea of delaying a proposed ban on its oil imports after objections from Hungary. Germany plans to stop importing Russian crude by the end of the year even if the EU fails to agree on coordinated action, according to government officials.