OPEC to meet amid virus threat to oil prices

Oil declined after an industry report showed a rise in U.S. crude stockpiles, deepening losses after closing below US$50 a barrel for the first time in a year amid fears the lethal coronavirus will imperil crude demand.

Futures fell 1.5 per cent in New York Tuesday after the American Petroleum Institute reported that U.S. crude inventories rose 4.18 million barrels last week, according to people familiar with the data. The rise intensified fears of a supply glut that has rattled investors with demand uncertainty stemming from China’s coronavirus outbreak.

“We’re getting close to the bottom and it’s clear OPEC is not going to sit on their hands,” said Phil Flynn, an analyst at Price Futures Group Inc. “There’s some dire predictions being priced in right now.“

The deadly virus has menaced markets by upending trade flows and is estimated to have cut 20 per cent from China’s oil demand as quarantined cities and closed factories cripple industrial activity in the second largest economy in the world. Refineries are curbing operations, while the nation’s top processor is trying to resell millions of barrels of crude it no longer needs. The crisis could wipe out a third of the growth in global consumption this year, said BP Plc Chief Financial Officer Brian Gilvary. 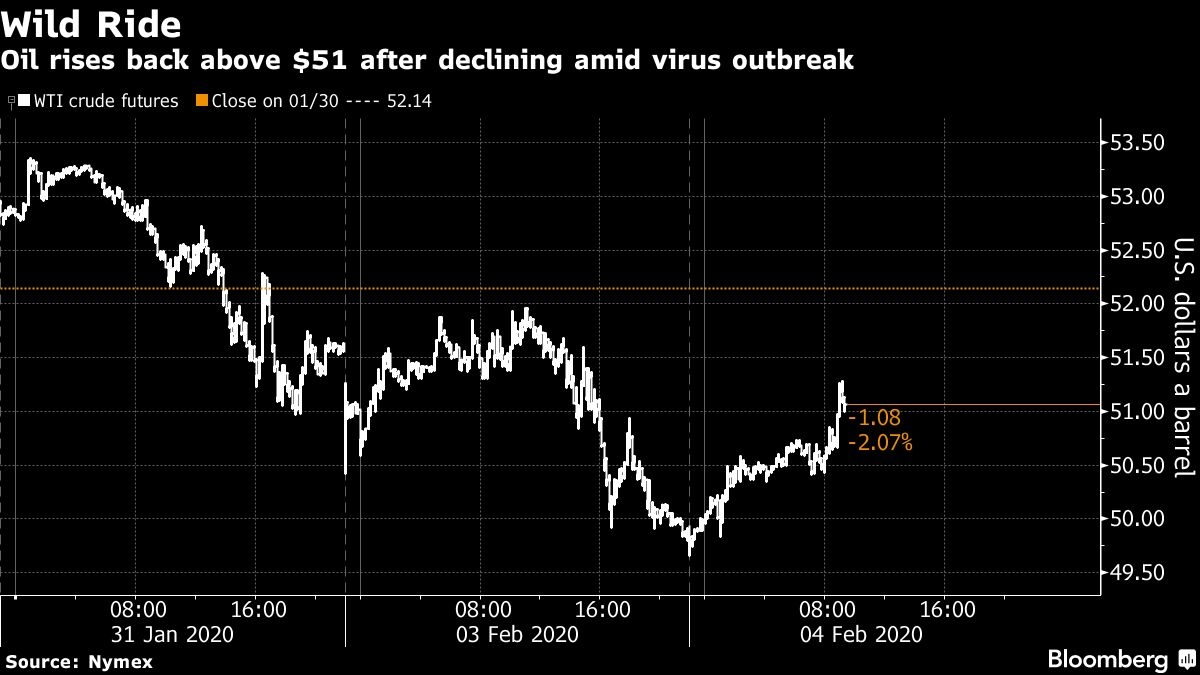 OPEC+ consulted with China in an urgent assessment of how the coronavirus may hurt oil demand, and what measures the group could take to stop prices falling any lower. A full meeting of the Organization of Petroleum Exporting Countries and its allies is currently scheduled for March, but the group is considering whether to hold that gathering earlier. The coalition is expected to discuss potential production cuts in response to the outbreak in China on Wednesday.

West Texas Intermediate for March delivery traded at US$49.44 a barrel at 4:41 p.m. after ending the session at US$49.61 a barrel on the New York Mercantile Exchange. Prices had briefly rebounded to US$51.55 earlier in the day.

Brent for April delivery lost 66 cents to US$53.79 on the London-based ICE Futures Europe exchange.

Traders are wary the virus-induced sell-off has driven prices to alarming levels that could ignite a crash resembling the plunge in October 2018 when Wall Street banks rushed to sell futures to cover options contracts, sparking further declines.

“WTI is trying to hold on to that US$50 support level,” says Olivier Jakob, analyst at Petromatrix. “But it’s going to be difficult unless OPEC takes decisive action, otherwise we’ll get to the lows of 2018.”

The extent of OPEC’s decision will also hinge on Libya’s oil output, Standard Chartered Plc analysts including Paul Horsnell wrote in a report. The country has been roiled by a political crisis that led to a blockade of its ports last month. Production has fallen to about 187,000 barrels a day, according to state oil firm National Oil Corp.

Gasoline futures fell 2.1 per cent to US$1.4432 a gallon.
China’s efforts to halt the coronavirus outbreak have spread to California, where they’re pushing jet fuel prices to the lowest in more than two years.
Iran’s Oil Minister Bijan Namdar Zanganeh said the country is exporting more gasoline than any other oil producer within OPEC, and its output at the giant South Pars gas field has bypassed that of Qatar’s, which shares the field with Iran.
Venezuelan crude exports from the main port of Jose are expected to drop this month amid lower demand from China, its second-biggest customer, according to people with knowledge of the situation.