The OPEC+ alliance warned of a “precarious” outlook as a resurgent coronavirus pandemic hurts oil demand, dropping further hints about a potential change of policy next month.

Unless the coalition changes tack, it will add almost 2 million barrels a day from January. But increasingly traders have warned the market cannot absorb so much oil.

Without tipping their hand, Saudi Arabia and Russia showed their unity at an OPEC+ Joint Ministerial Monitoring Committee meeting on Monday. Their top oil officials, Prince Abdulaziz bin Salman and Alexander Novak, offered bearish views. The Saudi minister warned of an “uncertain” outlook for demand and called on OPEC+ to be “proactive.”

“We know for certain it’s uncertain,” he said as the steering group of OPEC+ ministers gathered virtually to analyze the market before a full meeting on Nov. 30-Dec. 1. “We have to be able to take measures to head off negative trends and developments -- to nip them in the bud.”

Crucially, the panel didn’t discuss if OPEC+ should press on with plans to taper output cuts next year, delegates said. It can change course if needed, something it did earlier this year when the alliance delayed an supply increase by one month. Crude prices have fallen since the officials spoke on Monday, with Brent down 1.2 per cent this week to US$42.40 a barrel. That suggests the market is already expecting the cartel to revise its plans.

The group will probably “postpone the planned production increase in early 2021 by a few months,” said Giovanni Staunovo, a London-based commodities analyst at UBS Group AG. The “best indicator” for that was Novak’s comments about the slow recovery in energy demand, he said.

Delegates at the next JMMC meeting on Nov. 17 will likely recommend that an output delay is announced at the full meeting two weeks later, according to UBS. 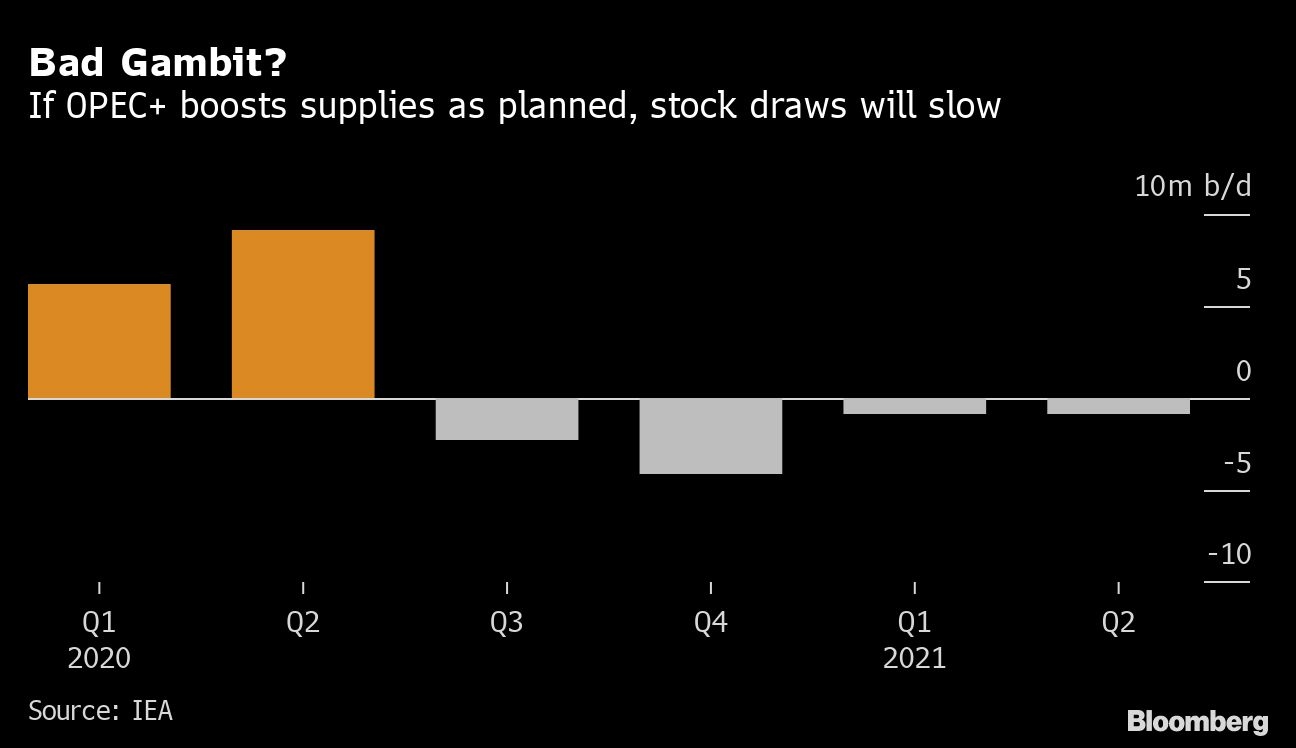 Saudi Arabia and Russia stepped up diplomacy in the lead up to Monday’s meeting, with President Vladimir Putin and Crown Prince Mohammed Bin Salman speaking twice by phone in a week. It was the first time the nations’ leaders have had such frequent calls since the depths of the oil crisis in April, when they hashed out a deal to cut supply and bring the price war to an end.

The countries are under pressure to prevent a repeat of the price slump that shook the industry earlier this year. The pandemic is surging again in many parts of the world and OPEC member Libya is also boosting production.

“We see how difficult the recovery is, we see a lot of uncertainties that get in the way of coming back to the pre-crisis levels of the global oil demand,” Novak said. The demand recovery “has slowed down amid the second coronavirus wave.”

Prince Abdulaziz last month insisted the Organization of Petroleum Exporting Countries and its allies would stabilize the market and dared oil speculators to test his resolve. He reiterated that determination on Monday.

Brent crude prices have more than doubled since OPEC+ agreed to output cuts in April, but are still down 36 per cent this year.

By insisting that the group should be preventive, the Saudi minister -- an admirer of former Federal Reserve Chairman Alan Greenspan -- seemed to be taking a cue from the world of central banking, where some monetary authorities prefer to err on the side of doing too much than too little during a recession. Prince Abdulaziz appeared to suggest as much.

“I cannot emphasize strongly enough how vital it is to show the strength of our resolve,” he said. “Nobody in the market should be in any doubt as to our commitment and our intent.”

OPEC+ is facing a slowdown in demand. Consumption isn’t likely to return to prior levels for at least a couple of years, particularly for jet fuel, trading houses like Vitol Group and Trafigura Group predict. OPEC+ also needs to keep whittling away global stockpiles to avoid another glut and a plunge in prices.

If the group “adds production as scheduled in January, then we will not draw crude stocks anymore,” Torbjorn Tornqvist, chief executive officer of trading house Gunvor Group Ltd., said in an interview.

--With assistance from Sharon Cho and Paul Wallace.