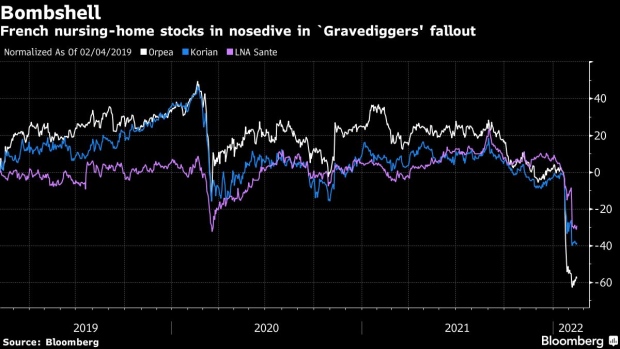 Orpea SA’s headquarters are being searched as part of multiple probes into the nursing-home company’s operations after allegations of mistreatment of its elderly residents in a book entitled “The Gravediggers” caused an uproar in France.

Officials from IGAS and IGF, state bodies responsible for investigations on social affairs and finances respectively, began inspections at the company’s headquarters in Puteux, near Paris, an outside spokeswoman said in response to Bloomberg queries. Other “unannounced” inspections are also happening at several nursing homes, including Saint Jacques in Paris and La Chanterelle, just outside the capital, she said.

The inspections are just the latest in a string of developments to have shaken the company since contents of the book first emerged in January. Orpea’s shares have lost more than half their value, it’s Chief Executive Officer Yves Le Masne has been ousted and now faces an insider-trading probe and the government, under pressure in an election year, has launched two investigations. Questions about Orpea have also hurt the shares of its rivals Korian SA and LNA Sante SA.

The book slams Orpea’s management for putting profits ahead of the welfare of residents, rationing items like food and adult diapers. Author Victor Castanet spotlights what he described as the “Orpea system,” organized to attract affluent customers. He says the business is focused on the healthiest or VIP residents like the relatives of important politicians or journalists, while residents no longer autonomous or capable of discussing their situation with their families are tucked away on higher floors with little or no care.

The scandal has highlighted Europe’s challenge of relying on privately-run for-profit nursing homes for their aging populations in spite of the region’s tax-funded healthcare systems. The French government, which last year announced about 2.1 billion euros ($2.4 billion) in investments to modernize nursing homes, is also under pressure for not putting an adequate system of checks and balances in place. It has pledged to unveil a series of measures this month on greater transparency, inspections and controls.

The IGAS and IGF inspections will be crucial in the determination of whether Orpea had indeed set up a system, as the book alleges. Results of the investigations, ordered by the government, are expected to be out mid-March.

Orpea initially called the allegations false, outrageous and prejudicial. It later hired Grant Thornton and Alvarez & Marsal to carry out an independent study of the allegations.

While there may have been problems at its nursing homes, Philippe Charrier, Orpea’s chairman and new CEO, denied earlier this month at a parliamentary hearing the existence of any “Orpea system, which would would consist in optimizing profit by rationing our services.”

Meanwhile, former CEO Le Masne’s insider-trading probe is related to transactions he carried out before the book’s publication. He has strongly denied selling Orpea shares on the basis of non-public information. While stepping down as CEO last month, he had retained his role on the company’s board of directors.

On Monday, he stepped down from that role, the Orpea spokeswoman said. He stopped participating in board meetings on Jan. 30, the day of his ouster, she added.