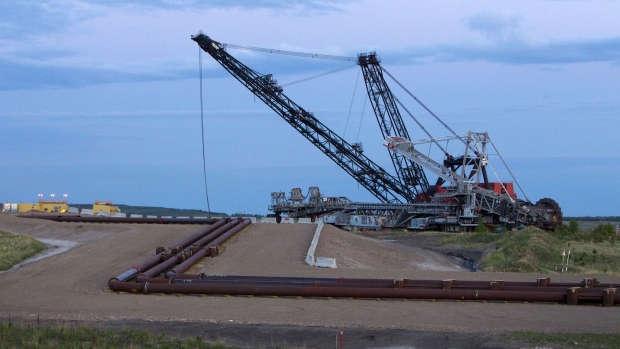 Pipeline leading to the Syncrude Canada Ltd. upgrader plant sits at the company's mine near Fort McMurray, Alberta, Canada, on Tuesday, June 2, 2015. Canadian stocks rose a second day as commodities producers rallied after the price of oil climbed to the highest level this year while gold and copper led metals higher. Photographer: Bloomberg/Bloomberg , Photographer: Bloomberg/Bloomberg

As Canada’s oil producers wait for a bailout to aid the hurting sector, one research firm has a suggestion: Sell crude to the government.

RBC Capital Markets said that an aid package could allow companies that shut in production to sell barrels of oil that they’re not producing to the federal government at a mutually agreed upon market price. They will be free to actually produce that crude later on, when prices are better, and refund the government the revenue it paid them earlier, smoothing out the producers’ revenue and “leaving taxpayers whole.”

“As a voluntary arrangement, Shut & Swap rests on market forces, and temporarily utilizes the balance sheet liquidity afforded by the Canadian government,” Greg Pardy, an analyst at RBC, said in a research note published Thursday.

Canada’s energy sector has been collateral damage in the Saudi-Russia oil price war and the Covid-19 pandemic. Storage tanks worldwide are brimming with crude as the global pandemic destroys demand, while Saudi Arabia and Russia ramp up output in a fight for market share.

At one point last week, a benchmark of Canadian heavy crude tumbled as low as $3.82 a barrel. The price of Western Canadian Select for May was $16.25 below West Texas Intermediate Thursday, according to NE2 Group.

And while Prime Minister Justin Trudeau has opened the government’s coffers to businesses in an effort to save the Canadian economy, nothing specific has been done for the energy sector yet. Finance Minister Bill Morneau said last week that further relief measures, specifically for the oil and gas and airline sectors, will come in the “not too distant future.”

The twin shock has taken its toll on all energy producers, big and small.

RBC’s Pardy said Canadian oil producers will need to shut in or curtail about 1.1 million to 1.7 million barrels per day, or one-quarter to one-third of supply, in the second and third quarters of this year.

“We have fielded a number of queries regarding the potential role that policymakers in Canada could play in providing energy sector support,” he said. “We believe that Shut & Swap -- a conceptual arrangement aimed at revenue smoothing -- could be a partial remedy.”