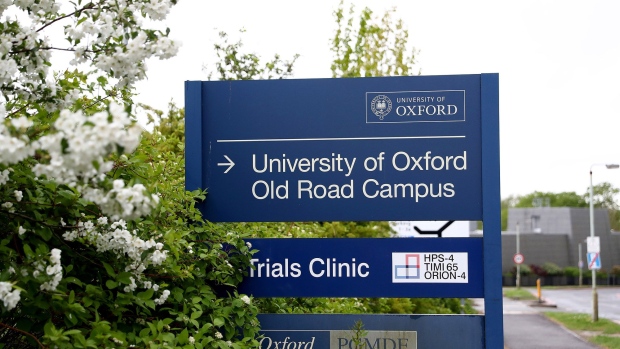 OXFORD, ENGLAND - APRIL 29: A general view of a sign outside of the University of Oxford Old Road Campus in Oxford, England on April 29, 2020. , Photographer: Getty Images/Getty Images Europe

The Oxford University team in charge of developing a coronavirus vaccine said a decline in the infection rate will make it increasingly difficult to prove whether it’s been successful, the Telegraph reported.

“It’s a race against the virus disappearing, and against time,” Professor Adrian Hill, director of the university’s Jenner Institute, told the newspaper. “We said earlier in the year that there was an 80 per cent chance of developing an effective vaccine by September.

But at the moment, there’s a 50 per cent chance that we get no result at all.”

Hill said he expects fewer than 50 of the 10,000 people who have volunteered to test the vaccine trial in coming week to catch the virus.

If fewer than 20 test positive, the results may be useless, the newspaper cited him as saying.

Although developers globally are working on as many as 100 experimental vaccines for COVID-19, the process is likely to take time.

Finding a vaccine and distributing it globally will be a “massive moonshot,” Dr. Michael Ryan, executive of director of the World Health Organization’s Emergency Program, said earlier this month.

There’s a chance the disease may be here to stay, he said.

The British government has agreed to pay for as many as 100 million doses, adding that 30 million may be ready by September.

The daily rate of new infections has fallen by almost two thirds since hitting a peak of almost 9,000 on April 10.

Separately, Reuters reported that Oxford University may join Moderna in a large-scale testing program in July.