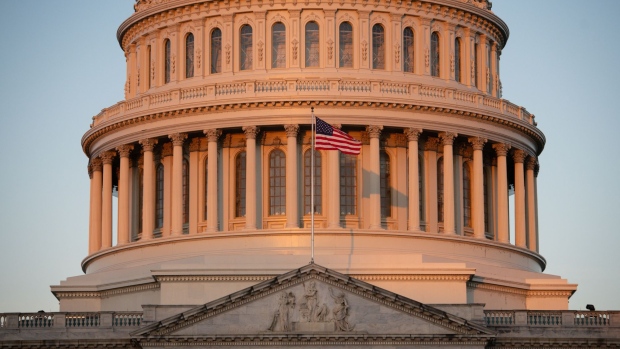 House Speaker Nancy Pelosi told Democratic colleagues that there are still big differences with the White House over a number of components of the fiscal stimulus, even as an agreement nears on a coronavirus testing program.

White House National Economic Adviser Larry Kudlow suggested the continuing disputes show Pelosi doesn’t want to compromise. “The goalposts are moving -- you get to this point and then something else happens,” he said on Fox Business on Friday.

While many differences remain unresolved, Pelosi and Treasury Secretary Steven Mnuchin had been making progress on the issue of a national Covid-19 testing strategy, on which Pelosi insisted. The speaker said late Friday afternoon her office was still awaiting promised changes to nearly-agreed-upon language from Mnuchin on that score.

“We’ll probably talk about it on Sunday,” after the paperwork is reviewed, she said on MSNBC. “We can’t speak before we see where we’re going on the language,” she said.

The speaker told colleagues Thursday that “many other disagreements remain,” besides the testing issue. She wrote in a letter to House Democrats that “these include but are not limited to funding for state and local government, tax benefits for working families, support for vulnerable small businesses, and child care funding.”

Pelosi also cited multiple so-called poison pills, “including their radical Liability Provision which forces workers to risk their lives in unsafe workplaces with no legal recourse.” Senate Majority Leader Mitch McConnell has been a strong advocate for liability protections for businesses to shield them from coronavirus-related lawsuits as they reopen.

McConnell has raised his own major roadblock to any deal: the size. President Donald Trump said Thursday he was prepared to go beyond the US$1.8 trillion his team had been trying to offer to Pelosi, who favors a US$2.2 trillion plan.

“He’s talking about a much larger amount than I can sell to my members,” McConnell said Thursday of Trump’s latest position.

The Treasury chief told Pelosi that Trump would weigh in with McConnell if an agreement were reached. Trump himself said of the Senate Republicans, “They’ll go. I haven’t asked them” because there isn’t a deal yet.

“If Speaker Pelosi wanted a deal I think we could round up enough Senate Republicans to get a deal,” Kudlow said Friday.

Pelosi and her lieutenants plan to talk in a conference call Monday afternoon with rank-and-file House Democrats, to update them on the negotiations.

Mnuchin is expected to head to the Middle East in the coming days, adding to signs that a pre-election agreement on stimulus won’t be forthcoming -- though both sides have pledged to keep working on it.

“The important point here is you only got” 18 days until the election, Kudlow said. “Even if you made a deal it would be almost impossible to execute. Maybe some of it can be executed. But you certainly couldn’t get a grand large deal” through by Election Day, he said.

Details of the emerging testing agreement haven’t been released. Pelosi and House Democrats have demanded US$75 billion for what they’ve described as “a science-based national plan for testing, tracing, treatment and isolation, and for the equitable and ethical distribution of a safe and effective vaccine once developed.”