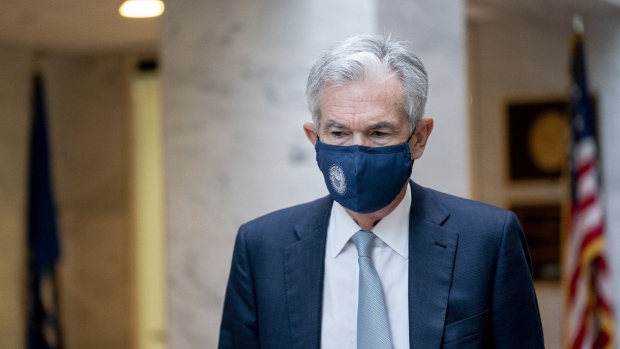 Jerome Powell, chairman of the U.S. Federal Reserve, departs the Hart Senate Office building in Washington, D.C., U.S., on Wednesday, Oct. 6, 2021. Democrats and Republicans must decide in the next day or two how far to take their deadlock over the U.S. debt limit, which is pushing the country perilously close to a catastrophic default. , Bloomberg

(Bloomberg) -- Federal Reserve Chair Jerome Powell said a probe by the central bank’s internal watchdog into trading activity last year by senior policy makers was “fully independent,” but he gave no update on when it would conclude.

“The timing of that investigation is within the control of the inspector general, so I can’t really comment on that,” Powell said Friday in a virtual panel discussion hosted by the South African Reserve Bank. “The inspector generals in our system of government, for our international viewers, are fully independent, have their own authority and investigate as they see fit,” he said, responding to a question from moderator Francine Lacqua of Bloomberg Television.

The Fed announced Thursday it will ban senior officials from buying individual stocks and bonds as well as limit active trading after an embarrassing scandal that led two top officials to resign. Powell said the changes were necessary to show officials have “a single-minded focus on the public mission of the Federal Reserve.”

The Fed said earlier this month that its watchdog would open an investigation into trading activity by senior U.S. central bank officials, following revelations about transactions in 2020.