Federal Reserve Chairman Jerome Powell signaled an openness to cut interest rates if necessary, pledging to keep a close watch on fallout from a deepening set of disputes between the U.S. and its largest trading partners.

Referring to “trade negotiations and other matters,” Powell said Tuesday in Chicago that “we do not know how or when these issues will be resolved.”

“We are closely monitoring the implications of these developments for the U.S. economic outlook and, as always, we will act as appropriate to sustain the expansion, with a strong labor market and inflation near our symmetric 2 per cent objective,” Powell said in opening remarks at a conference at the Chicago Fed.

Investors have aggressively increased bets the Fed will cut interest rates this year after President Donald Trump widened ongoing trade tensions when he threatened last week to slap new tariffs on Mexico unless it stemmed migrant flows to the U.S.

U.S. stocks surged following Powell’s remarks, with the S&P 500 on track for its best gain since January. Treasuries initially pared losses before declining further, pushing up the 10-year yield to 2.14 per cent, while the dollar was little changed from Monday.

“Powell is walking a tightrope -- wants to stay optimistic with still solid growth, but willing to cut if need be,’’ said Diane Swonk, chief economist at Grant Thornton in Chicago. “The threshold on a rate cut is falling.”

While investors have made clear they expect as much as half a percentage point of rate cuts from the Fed this year, Powell and his colleagues have also come under pressure from the president to ease borrowing costs to help boost the U.S. economy. Powell has been careful not to respond to Trump’s barbs, promising to set policy as the economy dictates. 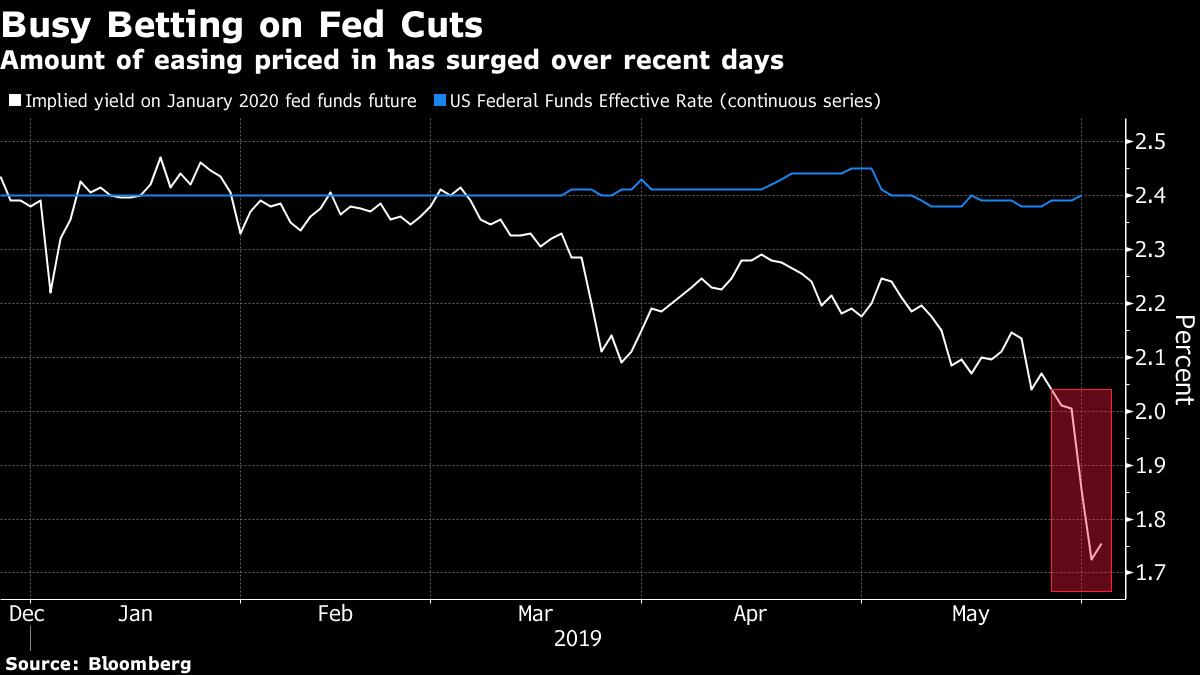 Powell’s speech was dedicated mostly to the Fed’s yearlong review of its monetary policy strategies, tools and communication practices. The review was triggered largely by longer-term worries over the Fed’s struggle to keep inflation close to its 2 per cent target.

Low inflation, along with subdued long-run growth, has helped keep nominal interest rates near historic lows even after almost 10 years of economic expansion. Low rates will make it hard for the Fed to fight a recession because rates probably cannot be cut below zero, or what the Fed terms, the “effective lower bound.”

“The proximity of interest rates to the ELB has become the preeminent monetary policy challenge of our time, tainting all manner of issues with ELB risk and imbuing many old challenges with greater significance,” Powell said.

With inflation less sensitive to tightness in labor markets, it’s tougher to bring price gains back to target in a recovery, he said. But keeping rates low might not be the answer: “Using monetary policy to push sufficiently hard on labor markets to lift inflation could pose risks of destabilizing excesses in financial markets or elsewhere,” Powell said.

The two-day research conference is the centerpiece of the year-long review. Fed officials and leading academics are set to debate whether they need to make changes in order to shore up inflation expectations and improve their defenses for the purposes of fighting the next economic downturn, whenever it comes.

The conference, which was announced in November, is taking place amid heightened volatility in financial markets, owing to increasing concerns about Trump’s threats to further restrict global trade. It also follows a string of government reports on consumer prices that have shown inflation drifting below the Fed’s 2 per cent target so far this year, which many economists fear will limit policy makers’ ability to stimulate the economy if necessary.

In remarks earlier on Tuesday, Chicago Fed President Charles Evans brushed aside the idea the Fed needed to cut rates in response to market pressure. Evans votes on monetary policy this year.

“With inflation being a little bit on the light side, there’s the capacity to adjust policy if that’s necessary, but the fundamentals for the economy continue to be solid,” Evans told CNBC television. “The consumer is solid. I think we have to think through what this really means.”

The FOMC next meets June 18-19 in Washington.

--With assistance from Steve Matthews and Benjamin Purvis