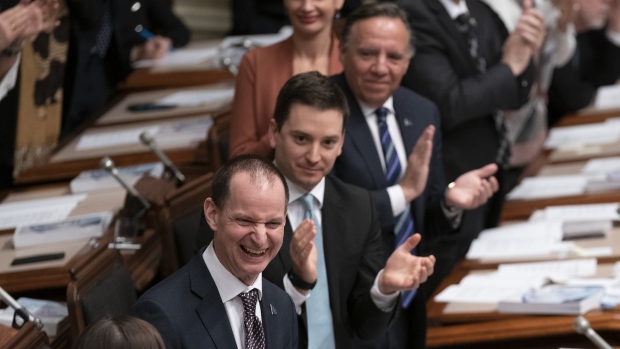 Quebec Finance Minister Eric Girard, left, is applauded by the government and Quebec Premier Francois Legault, right, as he stands to present his budget Thursday, March 21, 2019 at the National Assembly in Quebec City. The Canadian Press/Jacques Boissinot

Quebec is pushing back plans to balance its books by two years, giving itself room to support the post-pandemic recovery as it ramps up vaccination and boosts spending on health care and education.

Canada’s second-largest province will need seven years to eliminate its deficit, instead of the five previously expected, according to budget documents tabled Thursday. It now expects a deficit of $12.3 billion in the fiscal year starting April 1, 48 per cent larger than a November estimate, following a $15 billion shortfall this year.

That’s after contributions to a debt-reduction pool known as the Generations Fund, which the government pledged to continue. A balanced budget is projected for the fiscal year ending March 2028.

“One thing at a time,” Finance Minister Eric Girard said during a news conference. “We’re going to make sure that the Quebec economy finds its strength back before taking action to return to budget balance.”

The government vowed to stay away from deficit reduction measures for the next two years, until employment returns to pre-pandemic levels. The majority French-speaking province, which has had the most COVID-19 deaths in Canada, shut down 40 per cent of the economy for eight weeks at the start of the crisis and still has restrictions in place to contain virus variants.

Concerns about jobs echo the sentiment of the Bank of Canada, which has maintained extraordinary monetary stimulus to give the labor market time to heal. Federal Finance Minister Chrystia Freeland is also weighing additional spending worth as much as $100 billion over three years to support the recovery.

The budget is built on a growth forecast of 4.2 per cent this year after a 5.2 per cent contraction in 2020. Quebec earmarked $1.5 billion in the coming fiscal year to help boost growth, including funds to retrain workers and spur business investment. It’s also cutting the tax rate on small businesses to match neighboring Ontario’s.

Program spending will increase 5.9 per cent, with an additional $4.3 billion of COVID-19-related measures. Government revenue growth is expected to slow down to 1.9 per cent, mainly because of a drop in federal transfers, which jumped 20 per cent in the current year to help provinces fight the pandemic.

Girard estimated the cost of the virus, combining aid and missed revenue, will reach about $30 billion by 2025-2026.

The crisis upended years of efforts to bring Quebec back to fiscal health, which had turned the province into an investor favorite. Net debt is set to hit 45 per cent of gross domestic product as of March 31, from 39.9 per cent a year earlier.

The government plans to borrow at least $28.5 billion in 2021-22, down from $38.4 billion this fiscal year. About 32 per cent of Quebec’s borrowing was in foreign currencies.

With a provincial election expected next year, the government pledged to refrain from raising taxes and keep spending growth in line with revenue gains. It’s also hoping to get additional federal funds to cover health costs.