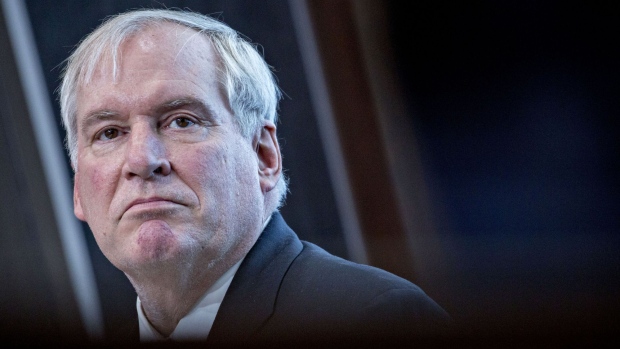 Eric Rosengren, president and chief executive officer of the Federal Reserve Bank of Boston, listens during a Hutchins Center on Fiscal and Monetary Policy event at the Brookings Institution in Washington, D.C., U.S., on Monday, Jan. 8, 2018. The event was entitled Should the Fed Stick with the 2 Percent Inflation Target or Rethink It. , Bloomberg

(Bloomberg) -- Eric Rosengren’s announcement Monday that he’ll step down early as president of the Federal Reserve Bank of Boston will bring intense scrutiny to the search for his replacement, and may shift more influence in that process to the central bank’s Washington leadership.

The Federal Reserve Board “will play a much greater role in this just because of the reputational risk on both diversity and ethics,” said Derek Tang, an economist at LH Meyer, a policy analysis firm in Washington.

Rosengren, 64, said Monday he’ll depart Sept. 30, more than nine months ahead of his mandatory retirement at age 65. He said the decision was tied to health concerns, revealing that he had qualified for a kidney transplant in June 2020.

Still, they prompted Fed Chair Jerome Powell to initiate a review of those rules, as the purchases occurred at a time when the Fed was buying multiple assets to support the economy.

Rosengren and Kaplan have each pledged to divest of individual stocks and other controversial holdings by Sept. 30.

Boston’s board chair, Christina Paxson, the president of Brown University, saluted Rosengren’s leadership over the past 14 years in a statement released by the Boston Fed. Regarding the trading issue, however, she hasn’t responded to requests for comment via telephone and email. Directors of the Dallas Fed declined to comment, according to a bank spokesman.

Paxson will be leading the search for Rosengren’s successor. Unlike members of the Board of Governors, who are nominated by the U.S. president and confirmed by the Senate, regional Fed presidents are selected by that bank’s board of directors. The boards typically include regional business leaders and members from the non-profit sector. Board members who work for banks supervised by the Fed are excluded from the process of selecting new presidents.

In recent years the appointments of new regional Fed presidents have attracted increasing scrutiny over whether they add to the diversity of the central bank’s top ranks. Raphael Bostic, the Atlanta Fed chief, became the first Black regional president in 2017, more than 100 years after the system’s establishment in 1913. Among the 12 current regional presidents, just three are women and two represent ethnic or racial minorities.

The growing pressure has, in turn, prompted the Fed’s Board of Governors to become more deeply engaged in the search and selection process. In the wake of the trading scandal, that pressure may only increase.

The governor who will act as liasion with the Boston board during its search is Lael Brainard. She’s expected to push hard for more diversity.

“Rosengren’s resignation is an opportunity to get a more diverse set of views on the Federal Open Market Committee,” said Julia Coronado, president of MacroPolicy Perspectives. “It really should be a priority.”

The most recent presidential selections have attracted varying levels of criticism. While Bostic’s appointment in 2017 and Mary Daly’s selection in San Francisco in 2018 were welcomed, four other spots went to white men, three of whom were Fed insiders.

In 2015, the Philadelphia board picked one of its own members, Patrick Harker, for the top job. Also in 2015 Dallas chose Kaplan, a former Goldman Sachs executive. In 2018, Richmond tapped former McKinsey consultant Thomas Barkin and New York chose John Williams, then already president of the San Francisco Fed.

During its search, the New York Fed board claimed to put an emphasis on diversity and inclusion, said Claudia Sahm, a former Fed economist and senior fellow at the Jain Family Institute.

“Where did they end up?” she added. “With a white guy who grew up inside the Fed.”

Rosengren’s early retirement means there are now five seats on the Fed’s policy-setting committee that might see new occupants in the coming months. The Federal Open Market Committee consists of the seven-seat Washington-based Board of Governors and 12 regional bank presidents.

Of those held by Washington-based governors, there is one vacancy. Another will open when Vice Chairman Richard Clarida’s term as a governor expires at the end of January. Vice Chair for Supervision Randal Quarles will see his leadership post expire in October and he is expected by many to depart the Fed when a successor is chosen. Finally, Powell’s post as chair will open in February and President Joe Biden hasn’t indicated whether he’ll reappoint him.

With Quarles, Clarida and Rosengren all viewed as centrist or moderately hawkish, their replacements could swing the committee somewhat more in favor of officials who would like to take their time in tightening monetary policy. In their most recent set of interest-rate projections, the FOMC was evenly split between those who expect rates to stay near zero through the end of next year, and those who expect at least one hike before the end of 2022.