Saudi Arabia finally kicked off what could be the world’s biggest initial public offering, revealing potential tax cuts and dividends to lure investors.

More than three years after Crown Prince Mohammed bin Salman first raised the idea -- and just three weeks after a plan to launch the share sale was abruptly delayed -- oil giant Saudi Aramco announced its intention on Sunday to list shares on the local stock exchange in Riyadh. The shares are likely to start trading in December.

Aramco’s valuation will be determined during the investor roadshow and book-building for the initial public offering, Chairman Yasir Al-Rumayyan said at a news conference at Aramco’s headquarters in the eastern city of Dhahran.

“I think this is the right time for us,” he said, adding that the percentage of international investors compared with local ones is still to be determined. “If we consider an international listing, it will be in the future.” Aramco will release a prospectus for the IPO on Nov. 9, Chief Executive Officer Amin Nasser said at the conference.

Aramco, which pumps about 10 per cent of the world’s oil, generated the most profit of any corporation last year with net income of US$111 billion -- more than Apple Inc., Google’s parent Alphabet Inc. and Exxon Mobil Corp. combined. It was targeting a US$2 trillion valuation -- more than double that of Apple -- but the kingdom is now ready to accept a valuation of US$1.6 trillion to US$1.8 trillion to ensure the IPO is a success, according to people briefed on the matter.

The sale is key to Prince Mohammed’s Vision 2030 plan to overhaul the Saudi economy and end the kingdom’s reliance on oil exports. The proceeds from the IPO will boost the firepower of the OPEC nation’s sovereign wealth fund, which already has investments in funds managed by Blackstone Group LP and SoftBank Group Corp.

Saudi Arabia’s Tadawul All Share Index fell as much as 2.4 per cent, led by Al Rajhi Bank and National Commercial Bank.

Grabbing a role in the deal has been one of the most hotly contested mandates for global banks. More than 20 have been mandated, with the top roles going to firms including Citigroup Inc., Goldman Sachs Group Inc., and JPMorgan Chase & Co. 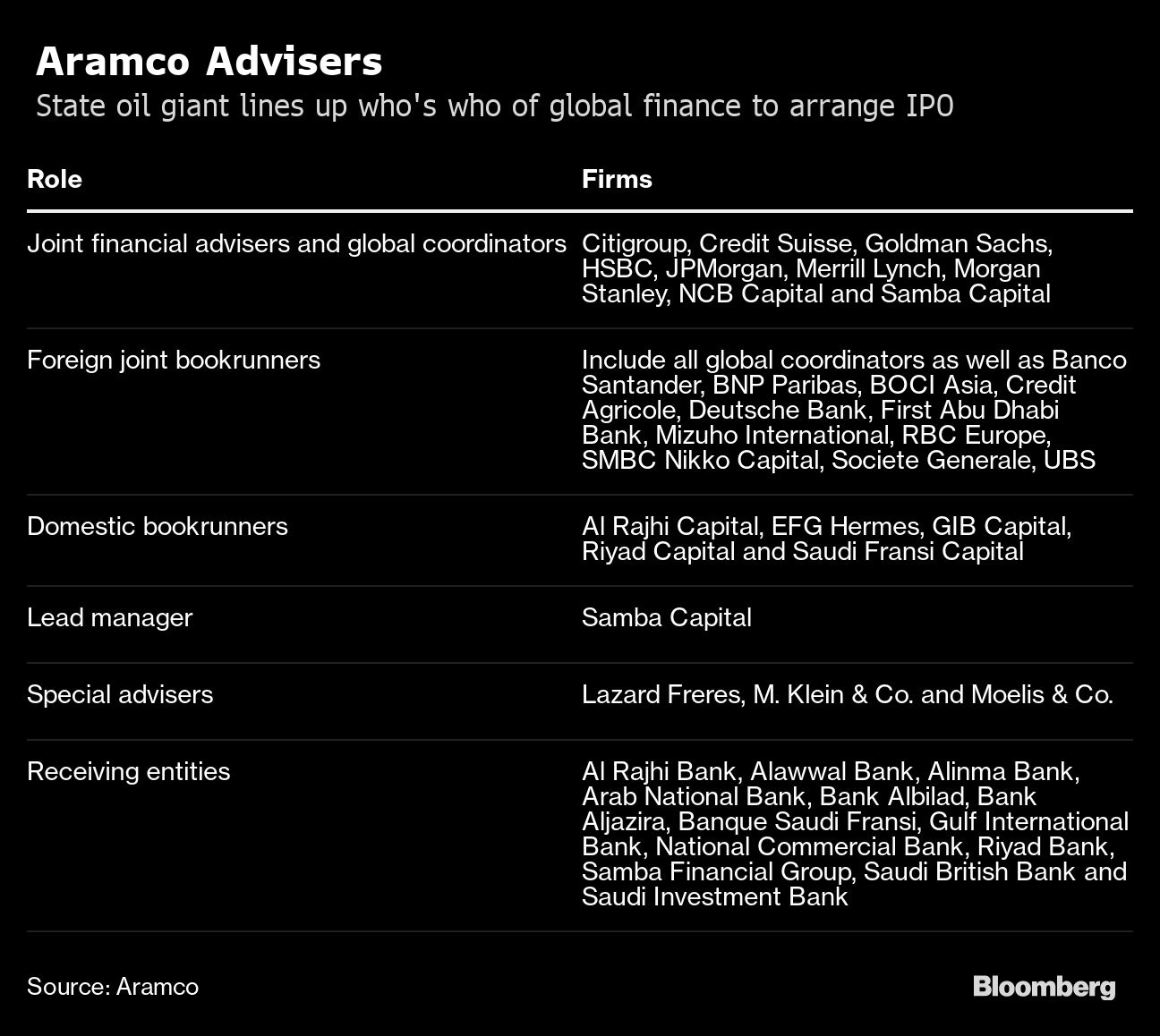 But the path to today’s announcement hasn’t been smooth. Prince Mohammed’s insistence the company is worth US$2 trillion has been met with skepticism from international investors. The original plan to list Aramco in either New York or London has been dropped in favour of a Riyadh-only flotation for now.

To do the deal, Aramco’s bankers will need hefty contributions from the kingdom’s wealthiest families, many of whom may have been targeted in 2017’s declared corruption crackdown that saw scores of wealthy Saudis held in Riyadh’s Ritz-Carlton Hotel.

The company has been tiptoeing toward the greater disclosure required of publicly traded firms. It published annual financial statements for the first time in April, ahead of a US$12 billion bond sale. 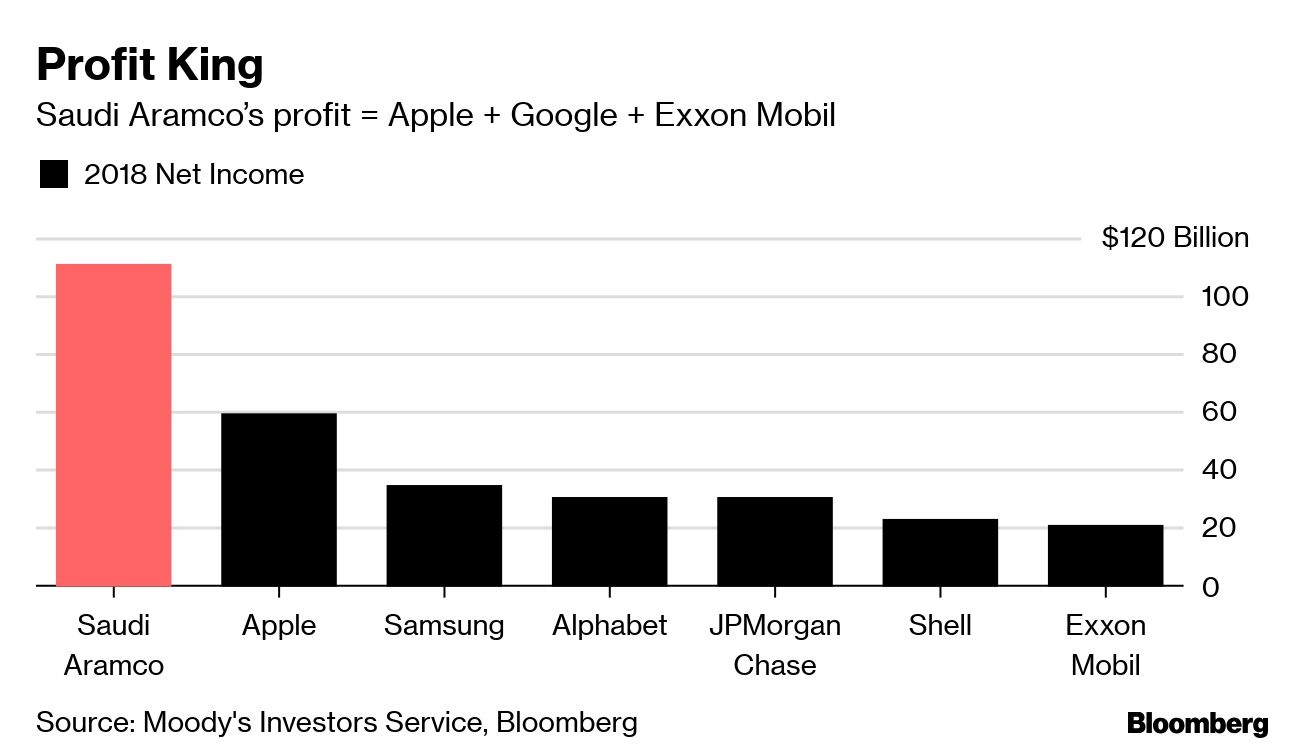 In an apparent effort to boost investor interest, Aramco said it will pay a tax rate of 20 per cent on its domestic downstream business starting next year -- compared with current levies of between 50 per cent to 80 per cent -- provided it consolidates this business under a separate, wholly owned subsidiary by the end of 2024. An exemption from royalties on condensate production will be extended for an additional 10 years when it expires at the start of 2023, Aramco said.

Aramco’s board confirmed plans to pay US$75 billion in dividends next year, in addition to any potential special dividends. The company has considered raising that to US$80 billion. At US$1.8 trillion that would mean a yield of 4.4 per cent, a decent payout in a low-interest-rate world, but still lower than the five per cent Exxon investors currently get.

Saudi retail investors will be eligible to receive one share for every 10 allotted shares if they continuously and uninterruptedly hold the shares for 180 days from the first date of trading and listing on the exchange, Aramco said in the statement.

Investors will have to weigh up how to factor in heightened geopolitical risks after attacks in September on Aramco’s crude processing facilities knocked out half its production. The company said it quickly restored output and never missed any customer orders, but the incident highlighted its vulnerability to regional military threats.

--With assistance from Anthony DiPaola.