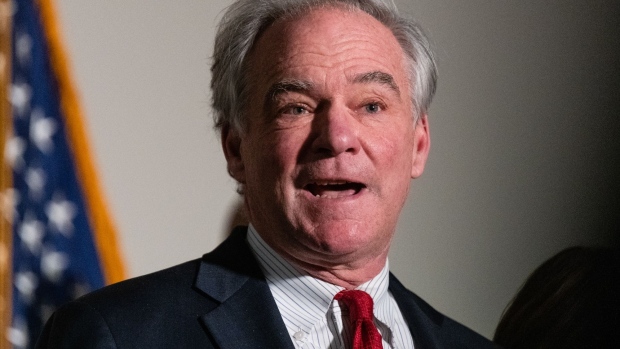 (Bloomberg) -- A Senate Democrat called on President Joe Biden to repeal tariffs put in place by the Trump administration, saying they haven’t significantly changed China’s trade practices and are contributing to high prices for Americans.

US Senator Tim Kaine of Virginia said Biden “can and must act now” and “pursue a broad range of solutions” to tackle US inflation that’s running at a 40-year high. Biden said in June he was considering possible action on US tariffs on China.

“The tariffs were neither well thought out nor well executed,” Kaine said in an op-ed in the Virginia-based Daily Press published online Saturday evening. “They didn’t significantly alter China’s unfair trade practices, and they are taking dollars out of Americans’ pockets.”

US inflation is eroding worker pay, straining household budgets and depressing Biden’s approval ratings just months before the midterm elections. Prices have surged across the economy, including at the grocery store and the gasoline pump. The rapid price pressures have led to an aggressive pivot by the Federal Reserve, but concern is mounting the central bank’s efforts to cool inflation could ultimately send the economy into recession.

Kaine called the tariffs “direct taxes on American families and importers” and said “undoing these tax hikes would reduce costs for consumers and allow manufacturers that rely on imported components to be more competitive in the global marketplace.”

In mid-June, Biden said he’d be talking to Chinese President Xi Jinping “soon” and was weighing possible action on the Trump-era tariffs. However, a few days later, Biden’s trade chief, Katherine Tai, said the tariffs on more than $300 billion in annual US imports of Chinese products provide significant leverage and are useful from a negotiating standpoint.

While Kaine is a member of Biden’s party, he isn’t the first to suggest repealing the tariffs on Chinese imports as a way to ease inflation pressures. Last month, the International Monetary Fund suggested rolling back tariffs imposted on steel, aluminum and a range of Chinese goods over the past five years.