The lead held past the closing bells on Wednesday, as Shopify ended the session with a market cap of $121.3 billion, compared to RBC’s $120.5 billion.

It’s been a meteoric rise for the Ottawa-based tech darling, with shares up 98 per cent year-to-date amid optimism the company will capture more business as consumers stay at home during the COVID-19 pandemic. Shopify said Wednesday its first-quarter revenue jumped 47 per cent year-over-year to US$470 million.

Lutke co-founded the company in 2004 after helping to develop the ecommerce platform to sell snowboarding gear and has grown the company to include 5,000 employees and post US$1.5-billion in revenue its it most recent fiscal year, though the company has yet to report sustained profitability.

By comparison, RBC was incorporated in 1869, shortly after Confederation, and booked $12 billion in profit on $46-billion of revenue in fiscal 2019. The lender employs 82,491 people across its network. 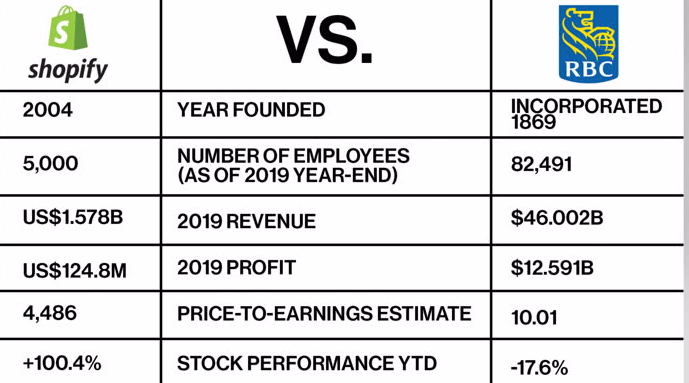