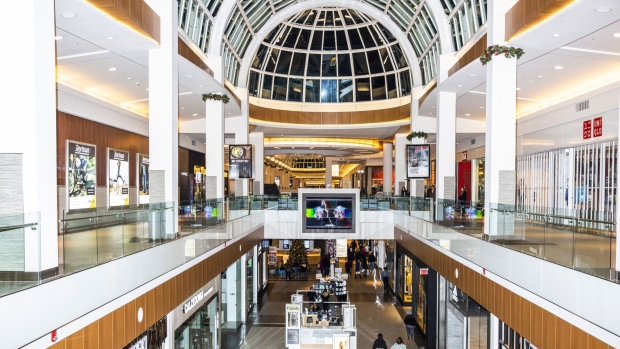 Simon will pay US$52.50 a share in cash for all of Taubman’s common stock, the companies said in a statement Monday. That’s about 51 per cent more than Taubman’s closing share price on Friday. Simon said it expects to fund the purchase with existing liquidity.

Simon and Taubman had been holding on-and-off discussions about a deal since late last year. The agreement comes as a wave of retail bankruptcies have squeezed mall-oriented REITs, putting pressure on the industry to consolidate.

The rise of e-commerce has more U.S. consumers shopping from home, making it harder for brick-and-mortar retailers to survive. That’s weighed on malls, which are struggling to boost foot traffic. While both Taubman and Simon have fared better than some competitors during the recent retail turbulence, the shares of both companies have slumped over the past 12 months.

Still, Simon was looking for a way to expand, and was attracted to Taubman’s portfolio of mall properties in a bid boost growth, according to Lindsay Dutch, an analyst at Bloomberg Intelligence.

“There are not many opportunities to grow in the retail landscape,” she said.

The company needs to focus on its U.S. malls, which have been hurt by store closings, and the deal may make room for that, according to Dutch. The purchase makes sense for Simon, given Taubman’s high-quality, well-located malls and Simon’s ability to reinvest in them, she wrote in a report Monday.

The deal would mark the end of family control of Taubman, one the pioneers of the American mall industry. Founder Alfred Taubman was one of the first developers to capitalize on the explosive growth of America’s suburbs. He built an empire of highly successful upscale regional malls, including The Mall at Short Hills in New Jersey, Woodfield Mall outside Chicago and Beverly Center in Los Angeles.

The agreement announced on Monday allows the Taubman family to retain an ownership stake in its malls.

Simon has flirted with other acquisitions in recent years. It previously tried to purchase Taubman as well as the shopping center REIT Macerich Co.

Taubman has relatively high exposure to Forever 21, which declared bankruptcy in September. Simon is also a landlord for the retailer and is part of a group trying to buy the chain.

Taubman has faced activist pressure in recent years. Investor Jonathan Litt won a board seat at the company in 2018 after a closely contested proxy fight. He chose not to run for re-election last year.

--With assistance from Mark Schoifet.