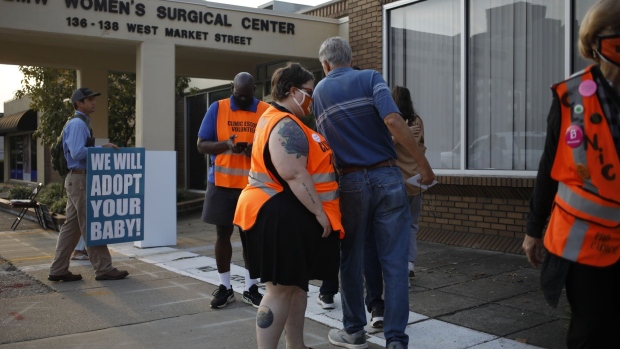 (Bloomberg) -- The heads of Slack Technologies Inc. and luggage start-up brand Away are joining major companies in supporting abortion-related causes.

Jen Rubio, co-founder and chief executive of JRSK Inc. — which operates as Away — said she and husband Stewart Butterfield, who leads Slack, will match up to $1 million in donations to the National Network of Abortion Fund. The fundraiser, which kicked off on June 29, will be carried out through the couple’s David C. Butterfield and Alfonso D. Rubio Memorial Foundation.

Donations would be split between abortion funds in states with trigger laws, as well as those in areas with protections that may be receiving an influx of out-of-state patients, Rubio explained in a tweet earlier this week. In a subsequent Instagram story, she said the drive raised $430,000 within its first 24 hours.

“Money alone won’t solve this issue, but there is an urgent need to support the organizations and individuals working tirelessly on behalf of our rights,” Rubio wrote in an emailed response to Bloomberg queries.

Rubio and Butterfield join other prominent figures and companies in raising money for abortion-related groups in the past week, since the US Supreme Court struck down a law that provided federal protection for the right to terminate pregnancies.

Debasri Ghosh, the managing director of the NNAF, previously told the New York Times that the organization received around $3 million in donations in the hours after court’s decision.

Non-profits that help coordinate and cover treatment and travel costs for people seeking an abortion have been bracing for an increase in requests for help. Rising costs pose an added challenge, with the Women’s Reproductive Rights Assistance Project, a national fund, noting the cost of abortion care has doubled from around $500 per person in recent months.

A recent report by the National Committee for Responsible Philanthropy found that 63% of donations made to abortion funds come from the individual level.

“There will be a significant amount of people who will require assistance outside of any employer health coverage,” Rubio told Bloomberg. “For those countless individuals, I hope that fundraising efforts such as these can serve to lessen the burden forced upon them.”