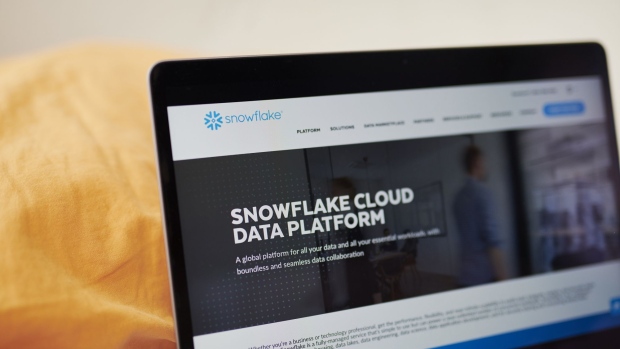 The Snowflake Inc. website homepage is displayed on a laptop computer in an arranged photograph taken in the Brooklyn borough of New York, U.S., on Wednesday, Sept. 16, 2020. Snowflake Inc. soared in a euphoric stock-market debut that transformed the eight-year-old software company into business valued at about $72 billion. Photographer: Gabby Jones/Bloomberg , Bloomberg

The San Mateo, California-based company made a name for itself earlier in the day, with the biggest U.S. IPO of the year and the largest ever for a software maker. Snowflake’s shares more than doubled to US$253.93 after the debut, which came in the midst of high Wall Street enthusiasm for cloud-computing stocks. Many of these companies, which deliver applications or services over the internet, have resisted the worst effects of a pandemic-fueled recession, and some have thrived while businesses, schools and governments operate remotely.

Investors have been on the lookout for the next Zoom Video Communications Inc., which has generated triple-digit year-over-year sales growth two quarters in a row. Rapidly growing Snowflake seems well on its way -- attaining a market value of US$70 billion after its first day of trading.

Slootman said he has spent a year trying to build a base of institutional investors who would keep billion-dollar stakes in Snowflake for at least five to 10 years and be shareholders more focused on long-term success than short-term “momentum.” This is part of the “carefully orchestrated” strategy he and longtime business partner, Chief Financial Officer Mike Scarpelli, put in place.

Snowflake’s IPO surge is a culmination of the broader success of cloud-based companies, said Daniel Elman, an analyst at Nucleus Research.

“Cloud has gone from a proof of concept or for things that were less critical to companies realizing it will enable a much more agile and modern architecture and working style,” Elman said.

Snowflake is the third technology company Slootman has publicly listed and he admits the novelty and excitement of an IPO has worn off a bit. He said he’s more interested in hiring, building partnerships and selling technology so that the company can meet its potential -- and he has no designs on pulling off a fourth IPO.

“Just staying on this growth trajectory takes one hell of an effort,” he said. “I’ll be here until they rip the jersey off my back.”

At the request of clients, the company has put more resources into developing databases that can process online transactions, to boost future growth, he said. The CEO, who is now a billionaire because of Snowflake’s stock surge, acknowledged how improbable it is that an eight-year-old upstart is now a formidable rival to the likes of Amazon.com Inc., the leader in public cloud services, and database stalwart Oracle Corp.

“Industries get attacked from the most unpredictable places,” he said. “You never see them coming because they’re under the radar and I’m sure Oracle never felt they had anything to fear from a company called Snowflake. But I always like to say, babies become soldiers.”