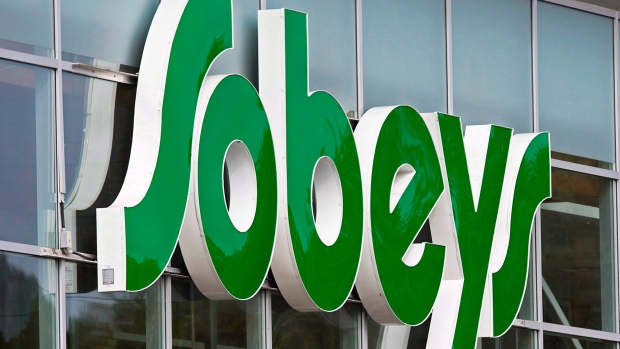 VANCOUVER -- Sobeys opened its first discount grocery store in Western Canada on Thursday as it works to catch up to competitors in the chase for frugal shoppers.

The FreshCo store in Mission, B.C., is the first of a dozen shops under that banner promised by Sobeys Inc. by the end of this year in an effort to grow market share in the west following a years-long fallout from its troubled acquisition of the Safeway chain.

"Sobeys is far behind our competitors in terms of having a presence in discount," said Mike Venton, general manager of the discount format at Sobeys, a subsidiary of Empire Co. Ltd. (EMPa.TO)

Sobeys operates more than 1,500 retail shops under a number of banners. Eighty-seven per cent of these are full-service stores, like Sobeys, Farm Boy or IGA locations, said Venton -- only 95 shops fall under the FreshCo or other discount banner names and they're all located in Ontario.

By comparison, Canada's largest grocer, Loblaw Companies Ltd. operated about 488 discount food stores at the end of its 2018 financial year and more than 390 locations under a number of other banners in its market division, according to its most recent annual report.

Metro Inc., which operates primarily in Ontario and Quebec, operated 228 discount food stores out of a total 947 food locations at the end of its 2018 financial year, according to financial filings.

"If you look at Western Canada, we have zero presence," Venton said.

The company said growing that figure would be one of its strategic priorities for its 2019 financial year. Sobeys first announced plans to convert up to one quarter of its existing Safeway and Sobeys stores in the Western provinces to the FreshCo banner in 2017.

Mission is the first of a dozen announced locations in B.C. and Manitoba. Two Winnipeg locations will open in early May, with two Richmond, B.C., ones to follow later that month.

Those 12 stores will start to shift the company's ratio of full-service to discount stores, though "it will be a long time before we move that number significantly," Venton said.

The company believes changing that ratio is strategically sound.

"The key to us is to make a big splash when we go in and then compete and grow market share," said Empire CEO Michael Medline during the company's most recent quarterly call with analysts.

"I would expect this won't change for quite some time either," he said.

Sobeys aims to avoid cannibalizing its business by choosing spots that had two or more full-service locations in a small region and converting one of those locations to the lower-priced FreshCo brand.

Meanwhile, it believes it can lure shoppers away from its competitors' through price guarantees and its ability to tailor its stores to individual communities, Venton said.

"We feel real good about our ability to attract customers and delight them with what we're going to put in those stores."

The plan to gain market share through discount offerings in Western Canada comes just as the company is starting to regain its footing after a period of losing ground to competitors following its acquisition of Safeway in 2013 for $5.8 billion.

Empire upset Safeway shoppers after it cancelled a popular loyalty program, failed to keep certain items in stock and made other significant missteps. Same-store sales plunged as customers turned to other chains.

Empire launched Project Sunrise, a three-year transformation plan, to help turn the company around and Medline said recently that it has gone from losing a lot of market share to stabilizing to starting to gain some back.

The company seems confident it won't slip again as it brings this new brand to the west.

"We have a tried and tested model that we're very successful within Ontario," Venton said.