'There's a new force in the market': Accelerate CEO on investor appetite beyond traditional assets

A record month for SPAC listings is helping power the busiest-ever start to a year for initial public offerings, in another sign of the investor frenzy that’s led to overheated markets around the globe.

Special purpose acquisition companies completed nearly US$26 billion of share sales in January, surpassing the previous monthly record set in October, according to data compiled by Bloomberg. That’s helped fuel the US$63 billion of IPO fundraising worldwide this year, more than five times the proceeds from the same period a year earlier.

The surge of share sales comes as global markets hit record levels and armies of retail traders trigger wild swings in stocks like GameStop Corp., fanning fears of a bubble among some investors. More than 200 new listings have started trading this month, and the pace of deals is speeding up as companies rush to raise funds at frothy valuations while they still can.

“A lot of things have been accelerated on the issuance side,” Gaetano Bassolino, head of global banking for Asia Pacific at UBS Group AG, said in an interview Friday. “That sort of intensity and pace cannot be sustained for long. It’s good to raise money at a good time, but you also need to have a reason for doing it.” 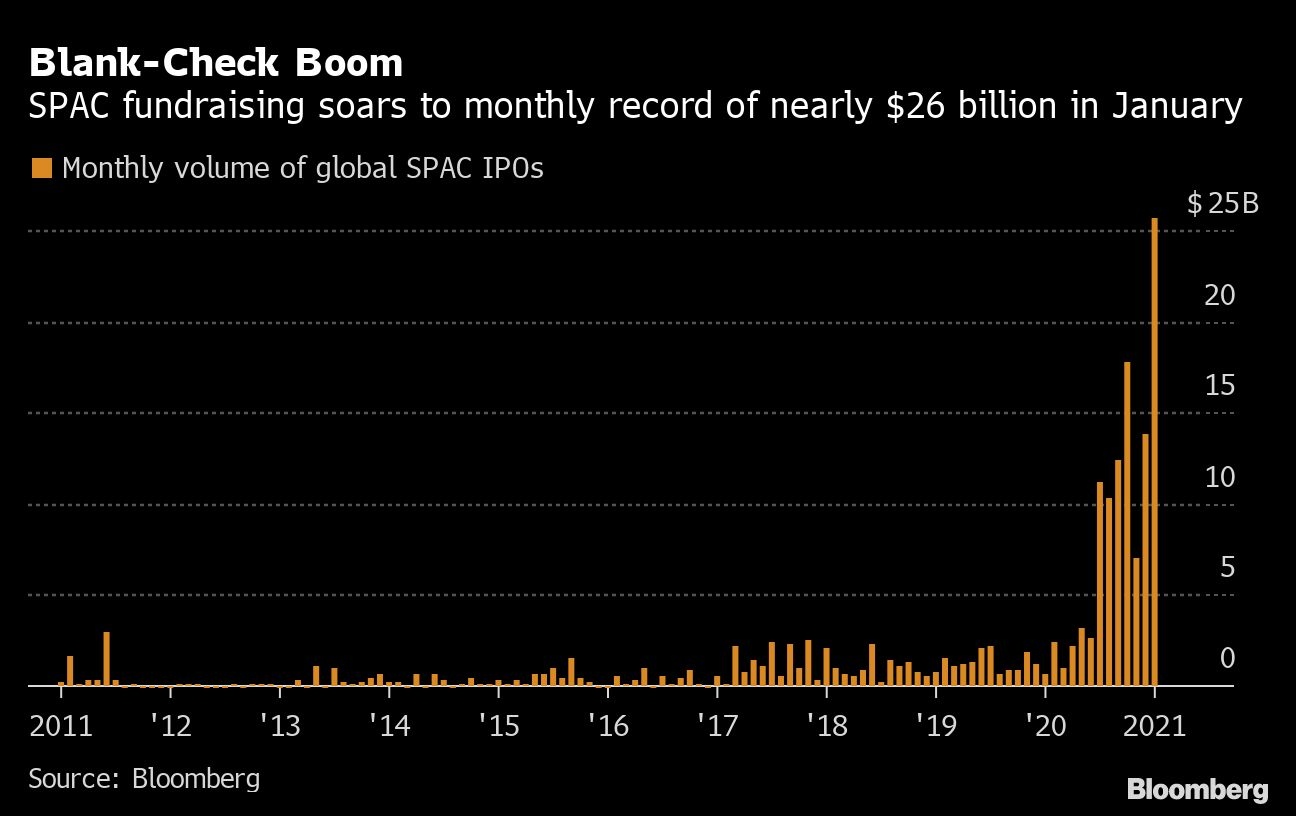 On the regular IPO front, fast-growing digital plays have been in vogue. Chinese short-video startup Kuaishou Technology saw a flurry of demand for its US$5.4 billion IPO, the biggest listing by an internet company since Uber Technologies Inc. in 2019.

Investors are also rushing to get in on the hottest offerings in Europe. InPost SA, a Polish firm that provides parcel lockers for e-commerce deliveries, received enough orders to cover its 3.2 billion-euro (US$3.9 billion) IPO after just 90 minutes. Iconic British bootmaker Dr. Martens Plc accomplished this feat in an hour for its share sale, which raised 1.3 billion pounds (US$1.8 billion) Friday.

Some companies are pushing forward their fundraising plans to take advantage of the buoyant sentiment, according to Udhay Furtado, co-head of Asia equity capital markets at Citigroup Inc. in Hong Kong.

“This is an attractive pricing environment for issuers -- it’s a very hot market,” Furtado said.

Strong demand is helping many of the companies raise more than they targeted. The five biggest U.S. IPOs this year all sold shares above the top end of their price ranges. Valuations have continued to soar when trading begins, thanks to frenzied interest from retail investors.

Survey software maker Qualtrics International Inc. had to repeatedly boost its fundraising target to keep up with demand. The company, which is controlled by SAP SE, increased the amount of stock in the deal twice and bumped up the price range twice -- only to finally price above the latest range and raise US$1.55 billion.

“The IPO boom at the peak of the cycle, record retail participation and the resulting surge in stocks and cryptocurrencies are all risks that could potentially result in a bubble and the end of a normal cycle,” said Fabio di Giansante, head of large-cap European equities at Amundi SA, the region’s largest asset manager.

The SPAC craze in the U.S. continues unabated after around 90 new blank-check companies started trading this month. More than 60 additional SPACs have filed for IPOs since the start of the year, including vehicles backed by Apollo Global Management Inc. and Lazard Ltd., taking the average for January to three new deals per business day.

“When the market starts to cool a little, the chill may be coldest in the SPAC market,” said Nick O’Donnell, a London-based corporate partner at law firm Baker McKenzie. “There have been so many SPACs that, along with the winners, there are going to be a good number of losers.”

“Because of the fact that we have a number of these parties who are recurring issuers, the time from new IPO to a SPAC to signing an M&A deal continues to shrink,” said Kevin Brunner, Bank of America Corp.’s co-head of mergers and acquisitions for the Americas.

More listings keep flooding in. Mortgage lender LoanDepot Inc. is taking orders for a U.S. IPO that could raise as much as US$315 million. Bumble Inc., the dating app backed by Blackstone Group Inc., could start trading mid-February.

Automation software maker UiPath Inc. has confidentially filed for an IPO that could value it at more than US$20 billion. Website-hosting service Squarespace Inc. said this week it’s submitted listing documents to the U.S. securities regulator. Grocery-delivery company Instacart Inc. and Intapp Inc., a software provider for professional services firms, are also preparing for listings, people familiar with the matter have said.

Investors have been in “risk-on mode” since the first day of the new year, which is driving the strong momentum, according to UBS’s Bassolino. Many companies are planning opportunistic capital raises, said Alice Takhtajan, a managing director on JPMorgan Chase & Co.’s U.S. equity capital markets team.

“There’s a lot of focus on raising dry powder and further strengthening the balance sheet, given the robust market, and having the flexibility to pursue acquisitions and investments,” Takhtajan said. “It’s going to be an incredibly active quarter.”