The once red-hot SPAC market has gone cold.

Two of the biggest exchange-traded funds tracking the hundreds of special purpose acquisition companies that popped up over the past year, as the oddball financial structures went from bit player to center stage, are trading at or near all-time lows.

The Defiance Next Gen SPAC Derived ETF (SPAK) plunged as much as 4.1 per cent on Tuesday, extending its year-to-date losses at one point to about 20 per cent. Its peer, the Morgan Creek-Exos SPAC Originated ETF (SPXZ), was down 30 per cent since its January launch. The losses shrank as tech dip buyers emerged, but SPACs and other speculative parts of the market still trail the broader indexes.

These declines highlight a waning appetite for SPACs amid two key inflection points. A rotation out of growth companies, including likely targets for blank-check firms. And a dissipation of retail dollars -- which many SPACs were tailor-made for -- from the market. 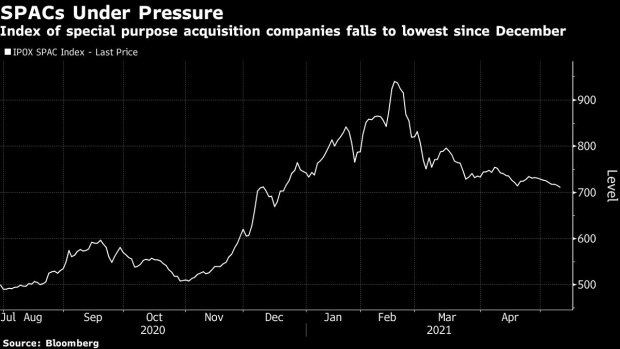 “The things that are getting the most pain are the ones that were the most risky to begin with -- they have a ways to go with profitability, valuations were stretched,” said Michael Arone, chief investment strategist for the U.S. SPDR exchange-traded fund business at State Street Global Advisors. “Those are the areas of the market that are likely to sell off more aggressively.”

The IPOX SPAC Index (SPAC), which tracks the performance of a broad group of special purpose acquisition companies, has fallen eight out of the last nine sessions and is down more than 20 per cent since a mid-February peak.

Included in the selloff have been the blank-check companies tied to the face of the SPAC boom: investor Chamath Palihapitiya.

Social Capital Hedosophia Holdings Corp. IV and Social Capital Hedosophia Holdings Corp. VI were at all-time lows Tuesday and close to dipping below the initial US$10 unit price. Clover Health Investments Corp., which has already completed a merger, currently trades at about US$8 -- below the US$10 threshold. Virgin Galactic Holdings Inc., a space tourism business that merged with one of Palihapitiya’s SPACs, is down 27 per cent year to date. And Opendoor Technologies Inc., another SPAC associated with Palihapitiya, has dropped more than 25 per cent this year.

Only Social Capital Hedosophia Holdings Corp. V remains positive on the year with a more than 20 per cent return.

“Clearly the market was flooded with too many SPACs, and understand that every SPAC is a blank check that now needs to go find a good deal. It needs to find a company that’s worthy of buying,” said Arthur Hogan, chief market strategist at National Securities. “There are over 400 SPACs, publicly traded, that still haven’t announced what deal they’re going to do and that has investors worried that the good private companies that otherwise would have come public in the SPAC process are running thin.”

To be sure, the fallout for speculative assets isn’t confined to just SPACs.

The Renaissance IPO ETF, which tracks newly public companies, is also under pressure -- the fund fell 1.6 per cent Monday and as much as 3.9 per cent Tuesday morning to reach its lowest level since November.

“It’s just simple DCF,” said Max Gokhman, head of asset allocation at Pacific Life Fund Advisors, referring to discounted cash flow. “If your valuation is more dependent on future cash flows, then as yields go up, so does your discount rate, and that means your valuation can drop quite a lot.”