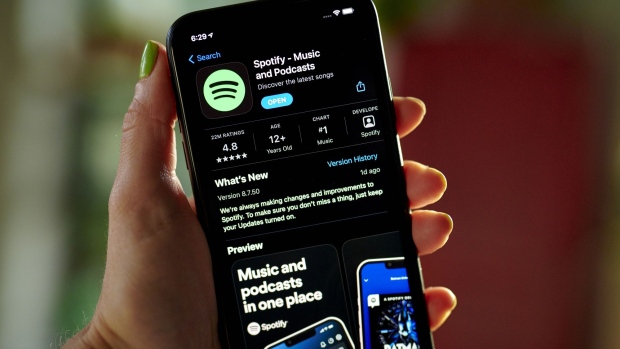 The Spotify application for download in the Apple App Store on a smartphone arranged in the Brooklyn borough of New York, US, on Friday, July 22, 2022. Spotify Technology SA is scheduled to release earnings figures on July 27. , Bloomberg

(Bloomberg) -- Spotify Technology SA eliminated five workers in its podcast editorial team this month, including four full-time employees and one contractor who worked to promote the company’s shows and run a related Discord channel. The group had about 14 people in total.

A spokesperson for the music-streaming giant declined to comment on the cuts.

The news marks the second round of cuts to hit a Spotify podcast team this year. In January, it disbanded its studio, called Studio 4, which produced shows like Dissect and Chapo: Kingpin on Trial. In June, Spotify said it would  slow hiring by 25% due to economic uncertainty.

The company has faced its share of challenges in the podcast space after aggressively pursuing acquisitions and content. In January, musician Neil Young asked that his music be pulled from the platform over misinformation he said Spotify’s biggest podcaster, Joe Rogan, peddled. Higher Ground, the Obama family’s production company, also left its exclusive deal in June, taking their efforts to Audible.

Multiple high-profile podcast division executives left the organization. Both Courtney Holt, who served as the head of talk partnerships, editorial and global markets, and Matt Lieber, a Gimlet Media co-founder who oversaw Spotify’s podcast studios, left their roles and now serve as advisers. Lydia Polgreen, managing director of Gimlet, moved over to the New York Times, and in June, the hosts of one of Gimlet’s best-known programs, Reply All, departed, and the program ceased current production.

The company reshuffled its podcast leadership in May, elevating Bill Simmons, who founded the sports and culture website and podcast network the Ringer, to oversee global sports content while Max Cutler, founder of podcast network Parcast, became the head of talk creator content and partnerships. Julie McNamara also now oversees the company’s three podcast studios as well as its original content.

In recent weeks, Spotify has emphasized its focus on launching new formats, like audiobooks, on the platform. Chief Executive Officer Daniel Ek has said he wants the platform to eventually attract 50 million creators.