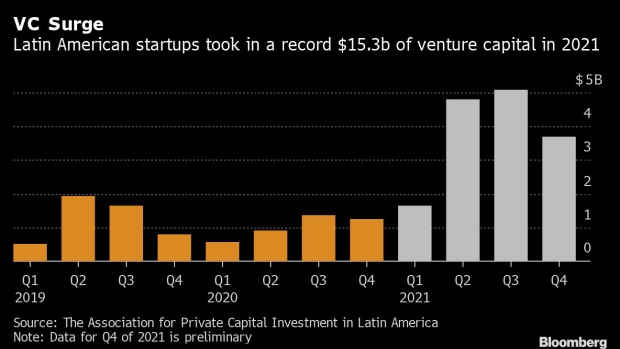 Startups attracted $15.3 billion last year, more than triple the previous record of $4.9 billion in 2019, according to preliminary data released Sunday by the Association for Private Capital Investments in Latin America, or LAVCA. Funding in every major country hit a record, led by Brazil, and financial technology, or fintech, garnered more than any other sector, the New York-based association said.

International funds are partnering with local shops in investment rounds big and small, said Julie Ruvolo, LAVCA’s managing director of venture capital. They helped create 17 private startups worth $1 billion or more last year, including a handful of companies in Mexico, like used-car reseller Kavak, which is valued at an estimated $8.7 billion. Mexico had no so-called unicorns as of January 2021, according to LAVCA.

It’s not just Latin America. Venture funding through the first half of last year rose 128% in emerging markets, versus the prior year. In Latin America, it was up 335%, according to the latest available data from the Global Private Capital Association, of which LAVCA is a member.