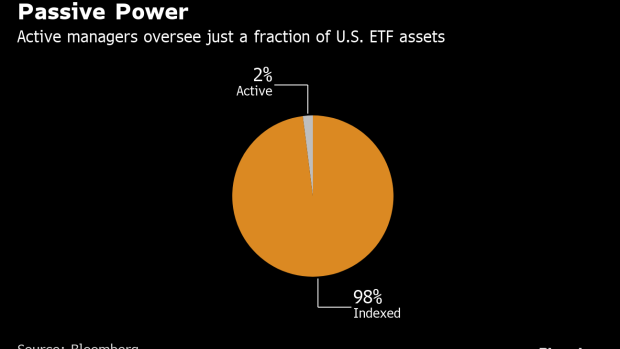 After more than four years of waiting, active managers may soon be able to start exchange-traded funds without giving away their investing secrets -- but it may be too little, too late to rejuvenate the industry.

In a milestone decision, the U.S. Securities and Exchange Commission said Monday that it plans to approve a special kind of ETF that partially conceals its holdings, unlike a normal fund that reports them daily. Proponents view the structure -- created by Precidian Funds -- as a way for stock pickers to get in on the ETF game and fight back against the shift to indexed products.

That said, it isn’t clear there’s much investor demand for ETFs with reduced disclosure.

“The interest has been far greater among asset managers than it has been among investors,” said Ben Johnson, who heads passive strategy research at Morningstar Inc. “More fundamentally it’s an asset management problem they’re looking to solve, with concerns around transparency.”

Active managers have been under competitive pressure from passive products like ETFs for years. Stock pickers have largely watched as the funds grew into a US$3.8 trillion industry, unwilling to start an ETF that would reveal their holdings and allow competitors to guess their strategy and possibly front-run their trades.

Now that they’ll soon be relieved of that problem, a larger issue related to fees remains: Paying more for active funds is increasingly unappealing to investors who saw two-thirds of such equity mutual funds trail their benchmarks in March.

Large asset managers who will pay to license Precidian’s ActiveShares technology include BlackRock Inc., JPMorgan Chase & Co. and Capital Group Cos., according to Precidian. Morgan Stanley expects the first funds to start trading within about six months.

“What we’re doing now is leveling the playing field for the active manager who can provide alpha, and allow him to bring his wares to market” said Dan McCabe, chief executive officer of Precidian.

But investors may not be eager customers given reservations about products with limited disclosure. Eaton Vance Corp. began selling non-transparent ETFs back in 2016. These funds, which function differently from Precidian’s model, have been slow to gather assets. A number of other structures are also seeking approval.

The broader effects and potential risks of limited-disclosure funds is still unknown, according to Ty Gellasch, executive director of Healthy Markets, a money manager advocacy group.

“This comes as the SEC and regulators around the world are already exploring the risks or potential for ETFs to exacerbate or transmit systemic risk, as well as potential conflicts of interest in ETF administration,” Gellasch said. “What happens in times of stress, and will that be different if investors don’t know what’s in the ETF?”