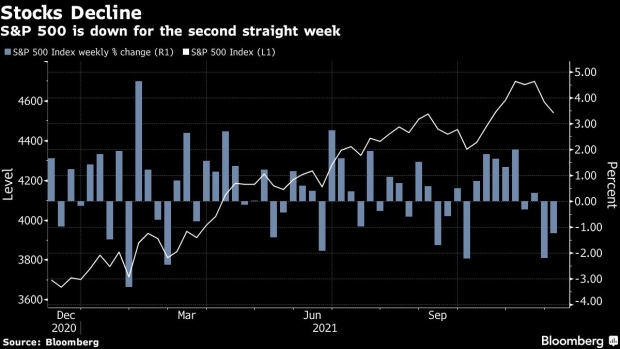 (Bloomberg) -- A small shift in language from Jerome Powell had major consequences for markets last week and has investors wondering how concerned they should be about the future.

Indexes bounced around like popcorn, meme stocks spiraled lower and volatility gauges surged in an anxious week for stocks, after the Federal Reserve chairman said officials should weigh removing pandemic support faster and that inflation was no longer “transitory.” Throw in rising angst about the coronavirus and it was one of the roughest stretches since the pandemic’s outbreak.

At the same time, panic over the thought of an unsympathetic Fed was tempered by the fact that its bond purchases would still continue into next year and by the overall sturdiness of the U.S. economy. Nonetheless, a more hawkish Powell is something investors haven’t had to deal with in three years.

The S&P 500 swung wildly throughout the week, at one point notching five straight closes of at least 1%, a bout of turbulence not seen in over a year. The VIX volatility gauge averaged its highest since January and Treasuries rallied. The flight from risk assets continued into Saturday, as Bitcoin plunged as much as 20%.

Here are five views on how dangerous the landscape is -- or isn’t.

On Tuesday, stocks sold off after Powell told the Senate the central bank will soon discuss a faster schedule for withdrawing stimulus. On Wednesday, after seeing the reaction in markets, he had a chance to walk it all back in a speech to the House -- but didn’t. “People talk about the change in tone from the Fed -- but it’s much more than that,” said Matt Maley, chief market strategist for Miller Tabak + Co. Anytime in the past when his comments ruffled the market, Powell consequently softened his approach, but this time “he doubled down.”

A less-accommodative Fed creates headwinds for a stock market this richly priced, Maley said. Stocks are much more expensive than the last time the central bank tapered. “The key is they went out of their way for 10 months to make sure people knew they’d be very gradual with their tightening -- that has changed,” he said. “They’re hitting the brakes much harder.”

Bank of America’s Savita Subramanian is keeping her wary outlook for the rest of 2021. To her, Powell’s comments indicate that the Fed is focused on inflation rather than employment.

“We remain cautious on S&P 500 amid a hawkish Fed tightening into an overvalued market,” the head of U.S. equity and quantitative strategy wrote in a note.

Yet she saw one reason for hope: seasonality. Historically, December has been the strongest month for the S&P 500.

With the market having recently touched record highs, many investors are likely looking for signals that its run might be over, said Peter Mallouk, president of Creative Planning, which has about $100 billion in assets under management. “Whenever you get near a top where things are just kind of moving along, you’re looking for what’s going to change the narrative here,” he said in an interview.

Still, Powell’s inflation acknowledgment could be a good thing. “There had been some serious denial there -- people were starting to wonder, frankly, his view of the world,” Mallouk said. “Now that at least he’s recognizing that there’s inflation, I think people like that -- and I think that people are worried about the party ending with the tapering, but also people are more concerned about runaway inflation so I think there is an offset there.”

While the market will have to take a breather once the Fed starts to move, most investors view the response as a positive, he added.

Powell’s comments confirmed that the central bank will be more aggressive, said Chris Gaffney, president of world markets at TIAA Bank, which could mean that interest-rate hikes happen sooner than expected. But there’s a silver lining: This will give investors confidence that the Fed won’t get “behind the eight ball on inflation -- that they are watching it, that they will be able to come in,” he said by phone.

While Fed officials could make a mistake, this week’s events “just shifted the thought of investors -- before, people were worried that we’d see an inflationary spike, that we’re already seeing an inflationary spike and that’s going to continue,” said Gaffney. “Hearing the Fed chairman turn a little more hawkish or start to say, ‘Yeah, we are watching inflation,’ I think gives investors more confidence.”

Friday’s jobs data reinforced to Liz Young, head of investment strategy at SoFi, that the labor market is healthy and the central bank has largely met its goal of reaching full employment. As inflation runs hot, the Fed should accelerate its tapering to clamp down on rising prices, she said. Whether or not a tapering acceleration will be dangerous for markets all comes down to the economic backdrop.

“If the reason for them tapering faster and hiking rates in 2022 is because the economy is strong and the market can withstand it, and we need to contain inflation in order to keep expanding, than that is a perfectly good reason to do both of those things,” she said.