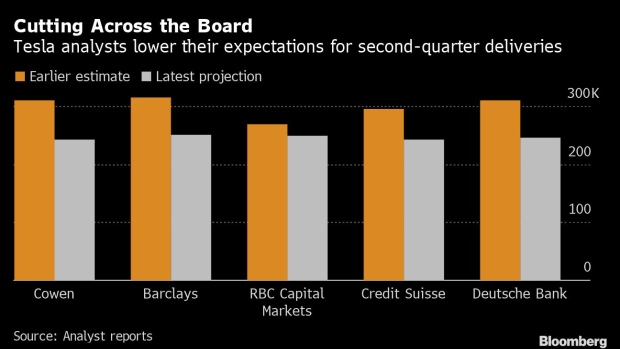 The man who dominates discussion about the future of transportation has gone uncharacteristically quiet at the close of a manic quarter.

Even by Elon Musk’s high bar for bedlam, the last three months have been wild. Considering all that happened — Shanghai’s shutdown, another factory opening, the chaotic Twitter deal and job cuts at Tesla — it’s no wonder the technoking has hunkered down (he fired off his last tweet on June 21).

Tesla started this quarter with a bang, reporting deliveries of more than 310,000 cars in the prior three months. The company is expected to come up well short of that mark for the period ending in June, with several analysts calling for fewer than 250,000 units.

When Musk disclosed the supposedly passive stake he’d taken in Twitter in early April and soon thereafter bid $44 billion for the company, it signaled Tesla was on stable footing. Surely, the carmaker’s chief executive officer — who already had his hands full also running SpaceX, Neuralink and The Boring Company — wouldn’t add more to his plate if all was not well at his most valuable venture.

But Tesla was already in the midst of a work stoppage at its top-producing plant, which is all but certain to have brought an end to its impressive run of record-setting deliveries. This was, of course, out of Musk’s control, and the supply chain challenges bedeviling the global auto industry have spared no one.

While Musk’s commentary during the quarter wasn’t exclusively positive — he said the “insane” price of lithium might force Tesla to get into mining and refining, for instance — his pursuit of Twitter wasn’t the only indication he gave that Tesla was maintaining momentum. He staged a splashy “Cyber Rodeo” in Austin and told fans the highly anticipated Cybertruck, Roadster and Semi will all be manufactured starting next year. During Tesla’s April 20 earnings call, Musk said the company may “pull a rabbit out of the hat” in Shanghai. Tweets about Taylor Swift and the merits of an edit button also suggested Tesla was far from production hell.

If Musk, who just turned 51 on Tuesday, was thinking about his life, legacy and empire-building when he decided to acquire Twitter, much like his rival Jeff Bezos seemed to be when buying the Washington Post, here-and-now fear of recession has begun to take precedent. He said in mid May the US was probably in one and made similar comments to Bloomberg Editor-in-Chief John Micklethwait last week.

In between, we learned Tesla will be doing another round of job cuts. Musk has said the company will dismiss about 10% of its salaried workforce over three months and put an end to remote work in most cases. Several people — including some who were just hired in May — shared on LinkedIn that they were terminated in June.

Tesla still hasn’t filed a WARN notice, which triggered a lawsuit on behalf of two workers at the company’s battery plant in Nevada. Layoffs are still in process, the latest of which include about 200 members of the Autopilot team at a Silicon Valley facility the carmaker is shuttering. Even so, Tesla is actively hiring for on-site recruiters in Austin, according to this LinkedIn post.

Deutsche Bank analysts wrote yesterday that they expect this quarter to be the trough for Tesla this year. We’ll get a better sense of just how rough it was when the company announces production and delivery figures in the coming days.