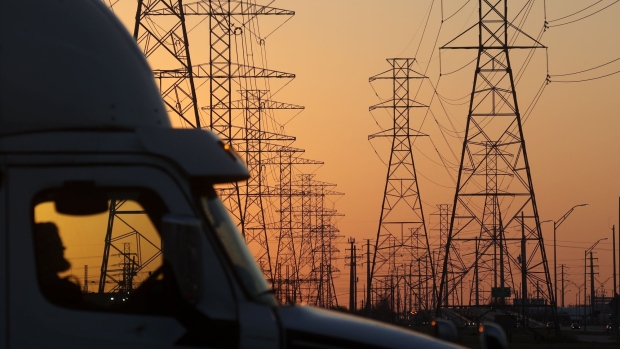 (Bloomberg) -- Last fall, Texas Governor Greg Abbott gathered dozens of cryptocurrency deal makers in Austin where they discussed an idea that, on its face, seemed almost upside down: Electricity-hungry Bitcoin miners could shore up the state’s power grid, a top priority after a deep freeze last winter triggered blackouts that left hundreds dead.

The industry’s advocates have been making that pitch to the governor for years. The idea is that the miners’ computer arrays would demand so much electricity that someone would come along to build more power plants, something Texas badly needs. If the grid starts to go wobbly, as it did when winter storm Uri froze up power plants in February 2021, miners could quickly shut down to conserve energy for homes and businesses. At least two Bitcoin miners have already volunteered to do just that.

There’s no guarantee anyone will build more generation or switch off just because they’re asked. There’s even a chance the idea could backfire and put more strain on the grid overall. But at last October’s meeting at the governor’s mansion, Abbott made it clear that he was going to count on the miners’ assistance when the electricity grid faced colder months ahead. Help me get through the winter, the governor said, according to four people who attended the meeting.

Getting through the winter may be key to Abbott’s political fortunes as he stands for re-election. He faces two main opponents in a March 1 Republican primary and a tougher fight in November against Democrat Beto O’Rourke. The grid is one of the governor’s few weak flanks: The most recent University of Texas/Texas Tribune poll, from October, showed that 60% of Texans disapprove of how state leaders have handled the reliability of the grid.

“There has to be a really thoughtful approach to bringing gigawatts worth of Bitcoin onto the system,” said Doug Lewin, an energy consultant in Austin. He said regulators need to require miners to shut down during a crisis, instead of making it voluntary. “We’ve got to make sure that if we’re getting close to scarcity, people aren’t mining Bitcoins anymore.”

Abbott is embracing an industry that sees itself as a libertarian form of finance free from meddling by banks and governments -- an ideal that appeals to his core GOP voters. That support, and Texas’s cheap electricity and near-zero regulation, helped spur big companies like Riot Blockchain Inc., Singapore-based Bitdeer Group and the U.K.’s Argo Blockchain Plc to build some of the world’s largest Bitcoin mines in the state.

In all, there are seven big miners and more than 20 smaller ones in Texas, according to the lobbying group Texas Blockchain Council.

Abbott and Republican lawmakers have taken some of the most aggressive steps in the U.S. to lure the industry. Last May, Texas became one of a few states to make it easier for businesses to hold crypto assets and use them as collateral for loans. Abbott also created the Work Group on Blockchain Matters, staffed by industry experts and insiders.

Texas is luring miners partially because other places don’t want them. Governments from China to Kazakhstan to Iceland have outright banned or limited crypto mining because of their drain on electric grids.

Lee Bratcher, president of the Texas Blockchain Council, finds opportunity in these bans. He’s met with Abbott several times to promote Bitcoin mining’s benefits to the power grid, including at the governor’s mansion last fall.

And Abbott isn’t alone. State leaders, from Austin Mayor Steve Adler on the left to conservative Senator Ted Cruz, are pushing Texas as a crypto paradise. A few days before the governor’s crypto meeting in Austin, Cruz spoke for 38 minutes at a blockchain industry conference, keying in on the potential for Bitcoin mining to bolster the state’s power system. “In five years, I expect to see a dramatically different terrain with Bitcoin mining playing a significant role as strengthening and hardening the resiliency of the grid,” he said.

Depending on Bitcoin miners is risky because there’s a chance they won’t shut down or will take too long to power off, said Ben Hertz-Shargel, global head of energy consultant Wood Mackenzie’s Grid Edge unit. As crisis looms, miners could vie for power with families and businesses. “At those times, Bitcoin mining would be competing with basic core societal needs like heating or cooling homes or the functioning of hospitals and nursing homes,” Hertz-Shargel said.

The governor’s embrace of crypto mining goes back years. Gideon Powell, an oil wildcatter in Dallas, recalls pitching crypto to Abbott soon after he got into Bitcoin mining about five years ago. And at another meeting a few weeks after last year’s storm, the governor quizzed him about how the industry could help stabilize the grid.

“He definitely seems to grasp it,” Powell said. “And it’s such a weird concept: ‘Hey, we’re gonna put more energy consumption in an energy system, and that’s going to stabilize the grid.’”

Texas’s competitive power market is central to the miners’ pitch. Nothing is more important to Bitcoin mining than electricity. It powers the computers that hum nonstop to solve complicated algorithmic equations. This work is the source of all the world’s Bitcoins.

Within two years, enough new Bitcoin mines will come online to require as much as 5 gigawatts of additional electricity in Texas, according to the Texas Blockchain Council. That’s enough to light up Austin, a city of almost 1 million, twice over.

There’s a risk those projections may need to be adjusted. Mining is only profitable when Bitcoin trades above the cost of the power and computers needed to create them, and prices are off almost 50% from a record high reached in November. An extended slump could delay the mining expansion.

For now, the idea of putting further stress on the grid is anathema to Texans who lived through last year’s storm, when frigid weather swept across the state, freezing up gas wells and forcing power plants offline. The blackouts left more than 200 people dead and paralyzed the state for almost a week. Texans blamed Abbott’s lax regulation of the electricity system, and lawmakers ordered hundreds of power plants to winterize.

“Everything that needed to be done was done to fix the power grid,” Abbott said in June. The power grid operator also is optimistic Bitcoin miners can help the grid, a spokesperson for the Electric Reliability Council of Texas, or Ercot, said in a statement.

But there are signs the risk of blackouts remains. Two arctic blasts in January shut down some gas production, exposing continued vulnerabilities for equipment that ensures the flow of fuel to electricity generators.

Rivals are hounding Abbott over his handling of the power disaster.

“Experts continue to warn that Texas could face another grid failure the next time we experience an extreme weather event,” O’Rourke said on his Twitter account in December after the governor promised the lights would stay on this winter. “Abbott and his appointees shouldn’t be betting our lives on the weather.”

Former state senator Don Huffines, a GOP primary challenger, announced a plan this month to do more than Abbott to stimulate crypto, especially to strengthen the power grid. “I am committed to making Texas the Citadel for Bitcoin,” Huffines said in a statement.

At the Oct. 13 meeting in the governor’s mansion, Abbott made it clear he’s already all-in on crypto mining. His blockchain working group is looking for more crypto-friendly laws and incentives to pursue, and the industry’s expansion plans have his support. When someone asked if Texas is “Bitcoin Country,” the governor smiled and agreed.