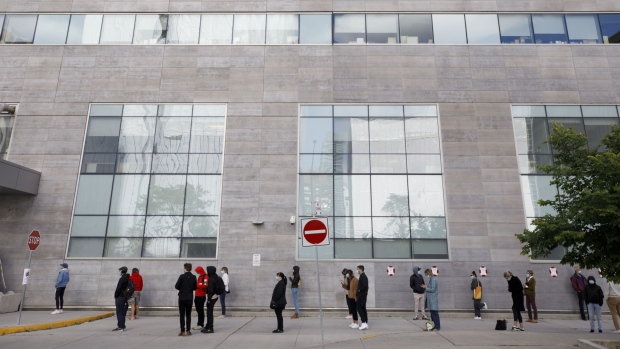 It’s looking more and more like Canada is in a race against time to contain COVID-19. New modeling data show the country is on course for 20,000 new virus cases per day by the end of the year – and possibly up to 60,000 if the public parties through the holidays.

So the question becomes how will governments at all levels respond, and what’s the economic impact? Ontario Premier Doug Ford has made it clear new restrictions will be announced this afternoon. But his province is by no means alone. Just yesterday we saw new rules announced in British Columbia and Manitoba. And Nova Scotia Premier Stephen McNeil strongly hinted in an interview with us that new measures will be announced in his province today as well. We’ll go in-depth on the stakes for the economy and public health system. One thing that’s clear this morning is that consumers ramped up spending before tougher restrictions came into force: indeed, retail sales rose 1.1 per cent in September – which was more than double August’s rate and quintuple expectations.

SOME SIGHS OF RELIEF

Bill C-9 is now law in Canada, allowing the federal government to formally launch its new commercial rent relief program that takes the power away from landlords to unilaterally decide whether to apply. Meanwhile, Moody’s Investors Service is standing by its Aaa rating on Canada, based on the expectation that spending hasn’t permanently spiraled out of control. “Moody’s believes that fiscal consolidation measures will be progressively implemented after the pandemic subsides as Canadaʼs long-standing political consensus on prudent management of public finances is expected to prevail,” the ratings agency said.

Overall, it’s a far more reassuring situation than what’s playing out in the U.S., where Treasury Secretary Steven Mnuchin has told U.S. Federal Reserve Chair Jerome Powell to return US$455 billion in unused funds that had been earmarked for the central bank’s emergency measures.

Jon Erlichman caught up with billionaire investor Jimmy Pattison, who gave his stamp of approval for West Fraser’s $4-billion purchase of Norbord. Pattison called it “a very good move” and championed West Fraser’s management. This matters because he’s West Fraser’s top shareholder – though he told Jon he learned about the deal when the rest of us did.

- Boralex is paying $121.5 million to take full control of three Quebec wind farms that it co-owns with the Caisse de dépôt et placement du Québec. Price tag could rise by $4 million depending on achieving certain conditions.

- Shares of Gilead Sciences are slumping in pre-market trading after the World Health Organization advised the medical community against using remdesivir to treat COVID-19 patients in hospital. “There is currently no evidence that remdesivir improves survival and other outcomes in these patients,” according to the WHO.

- As expected, Pfizer and BioNTech announced they’re applying to the U.S. Food and Drug Administration today for emergency use authorization of their COVID-19 vaccine – which they say could be put to use by mid-December in the United States.

- Cineplex announced a new agreement with Universal on theatre exclusivity for the studio’s films. Similar to arrangements Universal reached with other cinema operators, the deal guarantees Cineplex at least 17 days of in-theatre exclusivity before Universal can launch its movies on certain streaming services. That window of exclusivity will widen to at least 31 days for any film that grosses more than $50 million in its opening weekend.