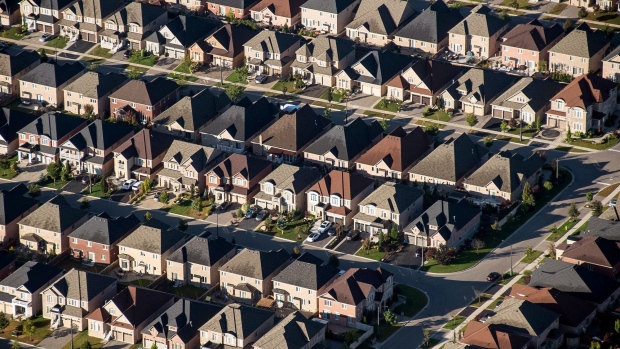 Homes stand in this aerial photograph taken above Toronto, Ontario, Canada, on Monday, Oct. 2, 2017. Toronto housing prices fell for a fourth month in September as sales remained sluggish, particularly in the detached-home segment that has borne the brunt of the correction in Canada's biggest city. Photographer: James MacDonald/Bloomberg , Bloomberg

No surprise here: the slowdown in Canada's largest housing market continued last month as higher interest rates mute demand. Sales across the Greater Toronto Area fell almost 11 per cent in September, and sank 44 per cent compared to a year earlier, according to the Toronto Regional Real Estate Board. The average selling price was little changed at $1,086,762 (albeit down almost 19 per cent from the February peak), and the local real estate board sounded an alarm about new listings setting a 20-year low for the month of September (though should be pointed out there was more inventory than in August). We’ll speak with TRREB’s president shortly after 8 a.m. EDT.

And if you missed it, check out Jacqueline's interview with Benjamin Tal from CIBC, who lambasted governments for not coordinating their efforts to fix what he called a "major national crisis" on affordability.

As of 6:30 a.m. EDT, it was looking like this could be a buy-the-rumour, sell-the-news situation as West Texas Intermediate and Brent crude futures were flat ahead of today’s decision by the cartel and its allies. Yesterday’s jawboning by unidentified sources got the market thinking about the possibility that output quotas could be cut by as much as 2 million barrels per day. So we have to wonder what will happen if the oil-producing nations don’t deliver on that.

Futures are suggesting the major North American markets will open lower after a two-day rally that saw the S&P 500 surge 5.7 per cent, while the S&P/TSX Composite Index wasn’t too far behind. The next major opportunity for market participants to weigh the odds of a pause or pivot by the major central banks will come Friday, with the release of jobs data in the U.S. and Canada.

Another Bay Street analyst is sizing up potential suitors for HSBC’s Canadian business after yesterday’s news that the division could be up for grabs; and this one landed on National Bank of Canada as the most logical buyer. In a note to clients last night, Mike Rizvanovic from Keefe Bruyette & Woods said National might have “the most compelling reason” to buy HSBC Canada. We’ll have more details on his rationale on TV and at BNNBloomberg.ca

IF AT FIRST YOU DON’T SUCCEED, TRY, TRY, TRY AGAIN…

If nothing else, Dye & Durham is persistent. Just a few weeks removed from seeing its protracted attempt to buy Link Administrations Holdings crumble, the Toronto-based software consolidator is now trying to buy some of its parts. Link disclosed in a market filing this morning that Dye is proposing to buy its corporate markets and banking and credit management operations for A$1.27 billion.

At least that’s the inference that can be made from the gap between where Twitter shares closed yesterday (US$52.00) and Elon Musk’s phoenix-like offer of US$54.20. Beyond the legal battle that Musk wants to avoid, there’s also the issue of needing to obtain the proceeds of a debt financing that he lined up for the transaction. So one of the biggest questions at this point might be how his bankers, who pledged US$25.5 billion in debt and margin loans, will proceed in this market that has changed a whole lot since they signed up in April.

A new survey suggests almost one-in-five small businesses plan to take advantage of a new power to apply surcharges on credit card transactions. the Canadian federation of small business said 19 per cent of respondents to the survey indicated they intend to take advantage of that option when it takes effect tomorrow. about one-quarter said they’ll do it if their competitors or suppliers apply the surcharge. the new optional levy is intended to help offset merchant fees, and it stems from a class action settlement with mastercard and visa. The Canadian Federation of Independent Business (CFIB) noted that because of consumer-protection laws in Quebec, the surcharge won’t be available in that province.