Federal Reserve officials viewed their interest-rate cut last month as insurance against headwinds from the trade war and low inflation -- reasons that look even sharper as they move toward their meeting in September.

Minutes of their July 30-31 meeting released Wednesday in Washington laid out the reasons for the quarter percentage-point cut, highlighting risks to the outlook even though the U.S. economy, for now, is performing well.

Investors fully expect another rate cut at the Fed’s Sept. 17-18 meeting and further easing this year. A big clue could come from Chairman Jerome Powell when he speaks on Friday at the Kansas City Fed’s annual policy retreat in Jackson Hole, Wyoming. 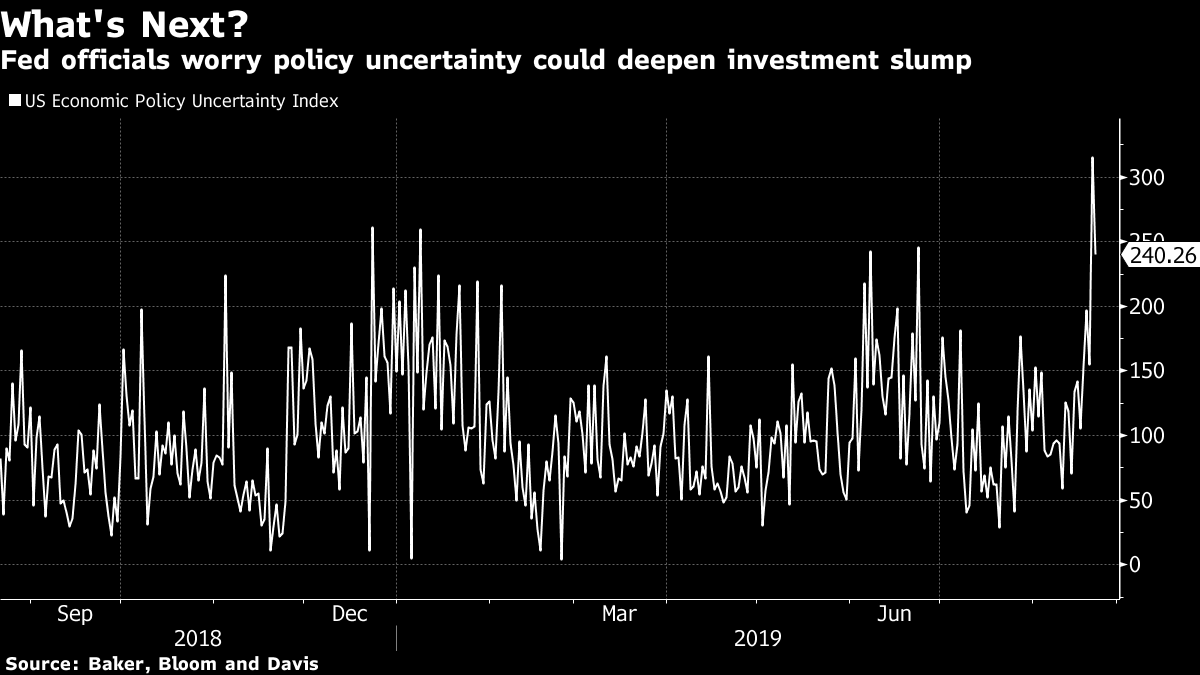 “The Fed is almost certain to ratify market expectations of another easing in September,” said Stephen Stanley, chief economist at Amherst Pierpont Securities, in a note to clients.

In the minutes, the case for the July cut was presented under three explicit bullet points. Here’s a look at the Fed’s arguments and what’s happened since then.

First, the Fed said the cut was to insure against a further slowing of business investment, stemming in part from a global manufacturing slump arising from trade uncertainty. One day after the Fed’s last meeting, President Donald Trump escalated his trade war by announcing additional tariffs against China. Since then, uncertainty remains high, threatening to paralyze investment decisions further.

The second reason the Fed listed was risk management, a phrase that encompasses various downside threats to the economy. One issue Fed officials underscored was that foreign central banks “had only limited policy space’’ to cut rates if growth slumped. Since the July meeting, data showed German output shrinking in the second quarter, as well as mounting concerns for a no-deal exit by Britain from the European Union.

“If anything the risks have increased since this meeting,’’ said Laura Rosner, partner at MacroPolicy Perspectives LLC in New York. “There will be more support for pre-emptive insurance rate cuts” when officials meet next month, she said.

Fed officials’ third reason for cutting was to re-set inflation back on its 2 percent target. While core inflation measured by the consumer price index rose 2.2 per cent for the year ending July, the committee’s larger concern is that the public’s longer-run price expectations are stuck below 2 percent because inflation has been so low for so long.

“Most participants judged that long-term inflation expectations either were already below the committee’s two per cent goal or could decline below the level consistent with that goal” if inflation remained too subdued, the minutes said.

Since the last meeting, the dollar has strengthened as the global economic outlook dimmed, adding more downward pressure on prices by making imports cheaper.

While U.S. data are mixed, economists remain largely positive on growth with estimates showing the expansion continuing into 2021, according to forecasts compiled by Bloomberg.

Retail sales in July advanced by the most in four months. At the same time, consumer sentiment plummeted to a seven-month low in August, raising the risk that the economy’s biggest engine may be poised to down shift. A key gauge of service-industry activity also decelerated last month.

“Because of the intensification of the downside risks, at least some previously reluctant FOMC participants probably now view another cut a bit more favorably than they did three weeks ago,” said Roberto Perli, a partner at Cornerstone Macro LLC, in a note to clients. “If that’s the case, a 25 basis point cut next month should happen.”

--With assistance from Christopher Condon