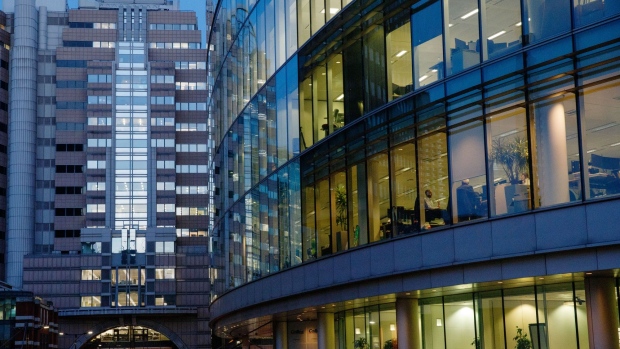 Office workers work at their illuminated desks at dusk in the City of London, U.K., on Monday, March 16, 2020. While the U.K. authorities have abandoned efforts to contain the coronavirus, focusing on delaying the worst of the outbreak, financial-services companies are grappling with policy as several offices cope with health scares. Photographer: Luke MacGregor/Bloomberg , Bloomberg

Is the coronavirus a temporary shock or will it do lasting damage to the global economy? This question will dictate the severity of the measures companies are taking to cut costs and preserve cash, and determine the shape and effectiveness of government bailouts.

The short answer is: Companies don’t know yet, because none of them have dealt with a pandemic of this magnitude before. Hence their early assessments of the seriousness of the problem have been quite different to those of their peers; and they’re being revised continually, mostly not for the better.

Last week some carmakers still sounded relatively optimistic, pointing to the reopening of dealerships in China and signs that sales there are rebounding as new coronavirus cases slow. BMW AG thinks the improvement in China could serve as a blueprint for what might happen in the rest of the world as governments implement draconian measures to contain the virus. That could explain why the German auto giant still plans to pay its shareholders 1.65 billion euros ($1.8 billion) of dividends. Volvo Cars is planning on a “return to normality” after Easter.

While the aircraft maker Airbus SE is scrapping its dividend and has beefed up credit lines, it’s poised to resume partial production at its French and Spanish sites this week and points to signs of recovery in domestic Chinese air traffic. This somewhat reassuring message has been contradicted, however, by Deutsche Lufthansa AG’s chief executive officer, Carsten Spohr, who has warned that when the coronavirus is over “there will be a smaller global economy and that means smaller airlines.” The implication of his message was the German carrier should start preparing now for that lower level of demand.

Such divergent views reflect partly how the travel and hospitality sectors will be hit harder by the virus than other parts of the manufacturing world. Customers needing a new car might delay their purchase but they won’t do so indefinitely. Eventually their old vehicle will wear out. In contrast, consumers probably won’t take two summer holidays next year just because they didn’t have one this time. Until the new coronavirus is fully under control, they might not book an overseas leisure trip at all.

It’s possible too that some industrial executives (beyond those exposed to travel) are underestimating the difficulty of containing Covid-19, including its impact on demand and supply chains. While Japanese schoolchildren are set to return to class in April, virus cases in Hong Kong have started increasing again. If governments keep having to reimpose quarantines until a vaccine is found —  which might take more than a year — a swift rebound could prove illusory.

Even if companies can keep their own factories running, the flow of crucial components and systems would be interrupted by further outbreaks or countermeasures.

When China quarantined a large part of its population, the rest of the global economy was still humming. But as the U.S. follows Europe in ordering many citizens to stay at home, the impact on consumption and employment will be severe. Germany’s gross domestic product is expected to contract by as much as 5 per cent this year, while the U.S. jobless rate is set to rocket.

Much will depend of course on the success of governments in channeling money to vulnerable citizens and businesses, and what form that assistance takes. If companies have to cope with months of negligible revenues, government ownership of large chunks of the economy may become unavoidable. Businesses borrowing more would only worsen corporate solvency issues.

Given such acute uncertainty, companies should hope for the best but plan for the worst.