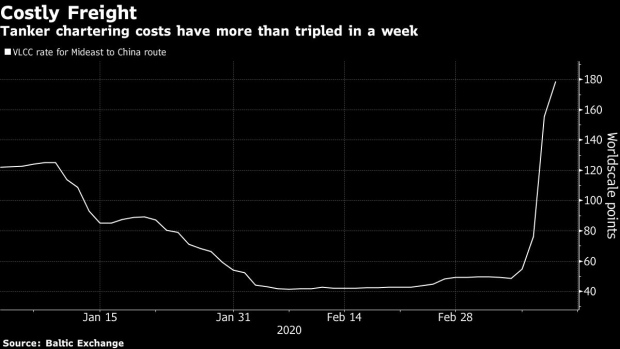 (Bloomberg) -- China’s top oil trader is trying to get out of loading some cargoes from the Middle East next month in the latest twist to the drama engulfing global crude markets.

Unipec, the trading arm of state-owned Sinopec, is looking to avoid taking delivery of at least four supertankers of crude for April loading, according to people with knowledge of the company’s plans. Each very-large crude carrier has the capacity for two million barrels of oil. It may try to get out of as many as eight VLCCs worth of oil, according to one of the people.

The company was allocated the cargoes as part of its long-term supply contracts, but now wants to reduce the volume it originally requested after a spike in freight rates made the shipments considerably more expensive, the people said. Additionally, the trader’s parent company Sinopec is planning to reduce crude processing at its refineries in May because of suppressed fuel demand in China, reducing the amount of oil it needs from Unipec, they said, asking not to be identified because the matter is private.

Producers in the Middle East such as Saudi Arabia, Iraq and Kuwait typically sell their oil via long-term contracts whereby their buyers agree on a fixed volume of supplies in a given year or time period, with some degree of flexibility. Every month, the buyer nominates the amount of crude it wants, within the limits of the contract, and then the seller allocates the volumes it will deliver.

In this case, Unipec is trying to get out of taking delivery of the full amount of oil it was allocated for April, the people said.

The company could try to cancel or defer the cargoes, but the legal grounds for doing so are unclear. It has sought to renegotiate contractual volumes before, resulting in a spat with Saudi Arabia’s state oil company in 2018.

The move comes as the world’s biggest producers flood the market with crude and slash their prices after the collapse of the OPEC+ coalition sparked a supply free-for-all. Saudi Arabia is unleashing a deluge of cheap crude on the market, allocating some buyers with volumes significant higher than normal, as it faces off with its erstwhile ally Russia.

To contact the editors responsible for this story: Alexander Kwiatkowski at akwiatkowsk2@bloomberg.net, Serene Cheong