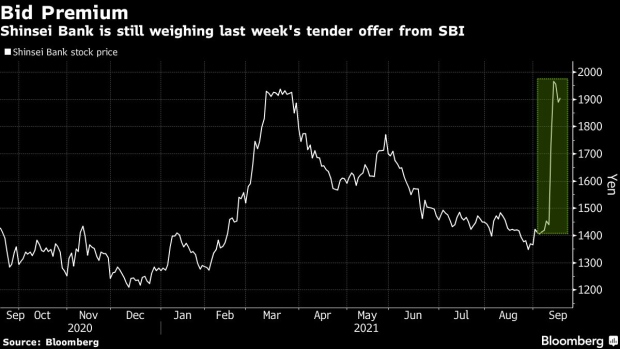 (Bloomberg) -- A billion-dollar unsolicited bid for an underperforming lender is Yoshitaka Kitao’s boldest move yet to build a fourth megabank in Japan.

Since an initial approach in 2019, Kitao weighed launching a proxy battle to oust CEO Hideyuki Kudo earlier this year, before backing off when regulators balked. Now, he’s hoping a hefty premium will allow SBI to lift its stake in the lender to 48% from 20%, giving him effective control.

It’s not how things are usually done in Japan. But Kitao, 70, already has a reputation for shaking things up after building the country’s largest online brokerage with bold measures such as slashing trading fees.

His latest move could consolidate the banking space and lay the foundation for SBI to become the “fourth megabank,” according to JPMorgan Chase & Co. The likes of Mitsubishi UFJ Financial Group Inc. and Mizuho Financial Group are part of a triumvirate that’s held sway in Japan for two decades. The finance veteran sees the acquisition of a bank as key to expanding his sprawling businesses, a person familiar with his thinking said, asking not to be identified speaking on a private matter.

“SBI already has a reputation as a self-assertive investor willing to go slightly beyond traditional ways of doing things in Japan in order to advance its business growth,” said Michael Makdad, an analyst at Morningstar Inc. in Tokyo. The firm was “clearly careful to engage regulators,” he said.

Kitao, who founded SBI more than 20 years ago as SoftBank Investment Corp. within billionaire Masayoshi Son’s empire, plans to remove Kudo and other top management if his most recent bid is successful, according to an SBI statement last week.

Shinsei is still weighing the $1.1 billion offer and said its board will discuss the proposal at a meeting Friday. SBI executives considered agitating to remove Kudo at its annual shareholder meeting in June, but the regulator discouraged it, according to a person familiar with the conversations.

SBI already runs banks in Japan and overseas and has invested in nearly 10 regional lenders. Still, Shinsei is by far the biggest and potentially most controversial. A stake of 48% would be just below the threshold that would subject the company to heavy regulation as a bank holding company, but large enough to give it control over the firm.

SBI said it first approached Shinsei in 2019 with a proposal to buy a controlling stake. When Shinsei management rebuffed that approach, the bank progressed to tie-up with SBI rival Monex Inc. That move destroyed whatever goodwill SBI had toward Shinsei, a regulatory official with knowledge of the matter said, asking not to be identified.

Then, in June, SBI weighed launching a proxy fight to remove Shinsei CEO Kudo, but the Financial Services Agency cited concern that it would force the government, Shinsei’s biggest shareholder at the time with a roughly 20% stake, to pick a side in a high profile proxy fight, a person familiar with the matter said.

Shinsei said Thursday that SBI’s offer statement left out some material necessary for shareholders to determine its merits. The bank also disputed SBI’s explanation that it made a tie-up with Monex without consultation. Shinsei said it had talks with SBI’s online brokerage unit and told SBI that there were other candidates also in the frame.

Shinsei repeatedly failed to attain its own targets on revenue and profitability over the past five years, SBI said. Shinsei’s consumer finance business had about 480 billion yen in outstanding unsecured loans as of March.

A perpetual underperformer, Shinsei trades at around 0.33 times book value, and remains about 80% lower than when it publicly debuted in 2004. SBI is hoping a 39% premium to the closing stock price on the day of the offer will win over Shinsei shareholders.