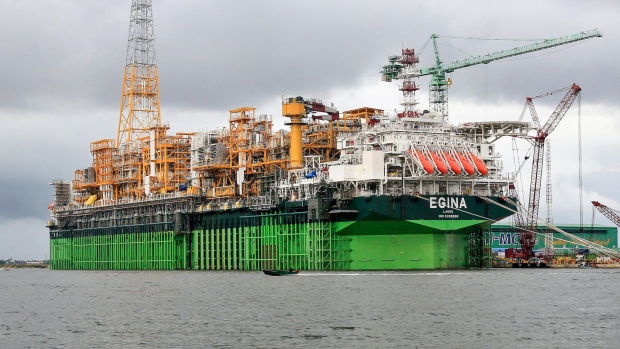 The Total SA 'Egina' floating production, storage and offloading oil vessel (FPSO), sits docked at the Ladol free trade zone port in Lagos, Nigeria, on Tuesday, May 22, 2018. Ladol, a logistics hub for the offshore oil industry in Lagos, Nigeria, is mulling a stock-market listing and corporate bonds to expand its facilities and get more business from major production companies. Photographer: George Osodi/Bloomberg , Bloomberg

Total SE joined the ranks of oil companies anticipating a peak for the industry in the coming decade, saying demand growth will end around 2030.

While the French energy giant’s analysis is more conservative than that of BP Plc, which earlier this month said the era of oil-market growth was already over, it adds to the chorus of executives and investors predicting rapid change for the industry.

Energy demand increased in all the scenarios considered in Total’s Energy Outlook report published on Tuesday, but most of the gains were seen being satisfied by low-carbon power. Electricity will comprise 30 per cent to 40 per cent of final energy demand in 2050, up from 20 per cent today, it said.

The outlook was better for the company’s other main product, natural gas, which is expected to play a key role in energy markets for decades to come as a less carbon-intensive bridge fuel.

Total and its European peers are channeling investment into clean energy such as solar and wind, battery technology and car-charging networks. While investors in BP and Royal Dutch Shell Plc appear skeptical of the transition, particularly after suffering big dividend cuts earlier this year, Total has so far avoided any big stumbles.